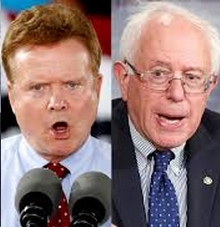 Jim Webb announced for president earlier today, and I’ve seen a slew of references in the corporate media (as well as from his supporters on Facebook) to how he’s “moderate,” “centrist” or even “conservative.” In fact, Webb holds an eclectic mix of views ranging from “left” to “right” on the political spectrum. Of course, I suppose if you’re lazy and tending towards mindless, you could just average all those views together to come up with “centrist” or “moderate,” but that doesn’t seem like a particularly sound approach to me. In fact, as you’ll see from where Webb stands (at least rhetorically) on several of the top issues facing our country, he’s not that much different from the Bernie Sanders/Elizabeth Warren wing of the Democratic Party in many ways. For instance:

1. Economic inequality: Rhetorically, with his frequent references to “Jacksonian” populism, the “rich getting richer, the poor getting poorer, and the middle class getting squeezed,” as well as to CEOs earning 350 times more than workers, Webb is solidly on the “left” of the U.S. ideological spectrum, not much different than Elizabeth Warren and Bernie Sanders frankly. Webb also “Co-sponsored legislation…to raise the federal minimum wage from $7.25 to $9.80 over two years” and then to “index the minimum wage to inflation to keep up with future cost-of-living increases.” Now, it’s true that in practice, Webb hasn’t always lived up to his economic populist rhetoric; for instance, he defined “middle class” for the purposes of the Bush tax cuts as earning more than $1 million per year. But at least rhetorically, Webb has long been on the Elizabeth Warren/Bernie Sanders “left” when it comes to income inequality in America.

2. Criminal justice/war on drugs: Webb’s definitely on the “left” on this one, speaking for years now about how the “war on drugs” has been counterproductive. Check out Presidential Hopeful Jim Webb Hints At Support For Radical Drug Policy Reform, for instance, which notes that Webb “supports decriminalizing drug use, a position that makes him the most progressive voice on drug policy among the current field of contenders.” Webb has also made clear that he thinks we imprison far too many people, calling our system of criminal justice “a national shame, a key indicator of how far we have fallen from our traditional image as an open, fair society.” On all this, I bet that Bernie Sanders would strongly agree with Webb, yet somehow Sanders is a “socialist” and Webb is a “moderate” or “centrist,” according to the corporate media? Alrighty..

3. Abortion, Gay Marriage: According to On the Issues, Webb said he “never left [the Democratic Party] on social issues and issues of economic fairness.” Webb also “Voted NO on prohibiting minors crossing state lines for abortion;” “Voted NO on defining unborn child as eligible for SCHIP;” “Voted NO on barring HHS grants to organizations that perform abortions;” “Voted YES on expanding research to more embryonic stem cell lines.” According to Project Vote Smart, Webb received all 100% ratings from Planned Parenthood and NARAL Pro-Choice America while he was in the U.S. Senate, and ZERO percent ratings from the anti-abortion and/or anti-gay Family Research Council, Concerned Women for America and National Right to Life Committee. Also worth noting: Webb “opposes a constitutional amendment to ban gay marriage…backs abortion rights as defined by the Supreme Court’s ruling in Roe v. Wade.” With regard to the Supreme Court’s recent decision legalizing gay marriage across America, Webb commented on his Facebook page, “The finding on marriage equality is an historically significant historical application of the 14th Amendment, ensuring that our government no longer discriminates but also more clearly defining the separation of church and state.” With regard to personal privacy, Webb said many times in his 2006 campaign for U.S. Senate (and afterward) that “I believe the power of the government ends at my front door unless there is a compelling reason to come inside.” Basically, Webb is a social libertarian, which is great from my point of view, but I’m not sure that makes him any more “centrist” or “moderate” than Bernie Sanders or any other Democrat.

4. Trade: According to On the Issues, Webb “believes trade agreements should require other nations to improve labor standards and wages.” Recall that in the 2006 Democratic primary with Harris Miller, one of the Webb campaign’s main line of attacks was that Miller was helping to ship U.S. jobs overseas. Also recall that the Washington Post endorsement of Miller specifically criticized Webb for a “somewhat strident populism on trade policy [that] tends toward xenophobic sloganeering and business-bashing.” Again, how is any of this significantly different than Warren/Sanders rhetoric?

5. Immigration: Webb has long supported “allowing illegal immigrants a path to citizenship.” Webb even “Voted YES on continuing federal funds for declared ‘sanctuary cities’.” Yes, Webb supports securing the border, but then again, so does Bernie Sanders, who “voted for the senate immigration bill in 2013, which would have increased border security and issued a provisional immigrant status to millions of undocumented residents once some significant security metrics had been met.” So, yet again, how is Webb any more “moderate” or “centrist” than Bernie Sanders?

6. Organized Labor/Unions: According to Project Vote Smart, Webb received in the 90%-100% range from the AFL-CIO while he was in the U.S. Senate. Webb bragged that “I stand before you as a card-carrying lifetime union member and a committed supporter of collective bargaining rights.” Webb added that he “voted to give firefighters and other public safety officers collective bargaining rights;” “opposed amendments too numerous to mention, which sought to undermine the fundamental collective bargaining rights of workers or make it harder than it already it is to form a union;” and was “the only candidate for a statewide office in the history of Virginia to walk a picket line during a campaign, as I did in 2006 with the Goodyear workers in Danville.” Again, how does that differentiate Webb on the “left”-“right” ideological spectrum from, let’s say, Bernie Sanders or Elizabeth Warren? Got me.

7. Foreign Policy: Webb is certainly not antiwar in any blanket way, but he did oppose the Iraq war and the intervention in Libya. On the other hand, Webb said with regard to Iran, “The United States and Israel must keep the rest of the world focused on this, and should not rule out pre-emptive military strikes if there is evidence that Iran is building a weapon.” Again, how is any of this much more “centrist” or “moderate” than Bernie Sanders, who has stated that it “is imperative that Iran not get a nuclear weapon,” or Elizabeth Warren, who says that “the United States must take the necessary steps to prevent Iran from acquiring a nuclear weapon?”

8. Health care: note: Webb was kind of all over the place on the public option, but he ended up voting for the Affordable Care Act, and at one point even asserted, “Probably the best approach, the ideal approach, would be to have not-for-profit insurance companies like they have in many of the countries in Europe, particularly Germany.”) In addition, as the Virginian-Pilot reported in June 2009, Webb “likes the idea of a competitive public plan because it may be the only way to cover the more than 47 million Americans without health insurance,” and also signed a letter with 15 other Senators “urging that a public option be approved.”

So, sure, Webb is more pro-gun than Sanders and Warren, probably more favorably inclined towards capitalism and less inclined towards a dramatic expansion of government than Sanders, and at least rhetorically more conservative on cultural issues like the Confederate flag. Webb’s also not strong on clean energy and environmental issues, never even mentions climate change, and that’s an automatic disqualifier in my book. Of course, I’d argue that the environment shouldn’t be a “right”/”left” issue at all, but more of a “right”/”wrong” one.  But anyway, the bottom line is that on the issues listed above, it’s hard to see how Webb is much more of a “moderate” (whatever that even means) than Bernie Sanders or Elizabeth Warren or many other Democrats. So why does the media insist on calling Webb a “moderate” but acting like Sanders (and Warren) are wild-eyed lefties or something? Perhaps it’s cultural: Webb’s white, Scots-Irish, a tough guy, a former boxer, a U.S. Marine combat veteran, former Reagan Administration official (that alone disqualifies him in reporters’ eyes as being a “liberal,” right?) someone with deep roots in rural America and ancestors who fought for the Confederacy. For lazy reporters, perhaps that’s enough, in and of itself, to make Webb more “moderate” than the Vermont Jewish “Socialist” with the strong Brooklyn accent?  Things that make you go “hmmmm…”

This absurd charade would be laughable if it weren't so nefarious. Thoughts about your political ally, Glenn Youngkin? https://bluevirginia.us/2021/09/friday-news-our-constitutional-crisis-is-already-here-the-jan-6-plotters-had-a-mob-political-journalism-needs-a-reset-mitch-is-crashing-america-but-hes-not-nuts-enough-for-trump-maricopa-fake-audit-fi#comment-5547254882