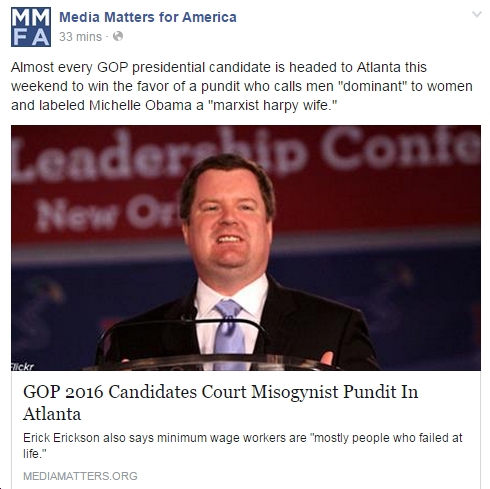 Thanks to the awseome folks at Media Matters, who do the job that the corporate media refuses to do – researching, finding out the facts (e.g., what people actually said or did), and informing readers. For instance, check this out on raging misogynist and anti-gay bigot Erick Erickson.

Numerous Republican presidential candidates are attending the 2015 RedState Gathering hosted by conservative pundit Erick Erickson. Erickson has said males should be “dominant” over females, claimed women should be “at home” while men bring “home the bacon,” labeled Michelle Obama a “marxist harpy wife” and Justice David Souter a “goat fucking child molester,” argued LGBT people are “on the road to hell,” and wondered when Americans would raid legislators’ houses and beat them to “a bloody pulp.”

A few other choice Erickson moments from recent months include:

*Erick Erickson: All of Obama’s Policies Are Designed To “Humble The Arrogant Crackers”

*Fox’s Erick Erickson: The Only Line Between “Gay Rights Extremists” And “Islamic Extremists” Is “Death”

*Fox’s Erickson: “There Is No Reason” For Anyone To Study Women Or Gender In College “Unless They Want To Be A Professional Victim”

*Fox’s Erickson Agrees That “The Homosexual Movement Is … Destroying America”

Now, think about what it means about today’s “insurgent outlier” Republican Party that most of its 2016 presidential candidates want to actually COURT this extremist bigot, let alone condemn him as they should. Oh, by the way, the ONLY reason raging misogynist Erick Son of Erick isn’t allowing Donald Trump at his conference is because Trump has attacked a Fox “News’ host, not because Erickson suddenly cares that Trump is a misogynist, bully, etc. Finally, can you imagine if Hillary Clinton, Bernie Sanders or Martin O’Malley courted someone who constantly says the types of things Erickson says? The media would be going ape. But if it’s Republicans doing it? Yawn.