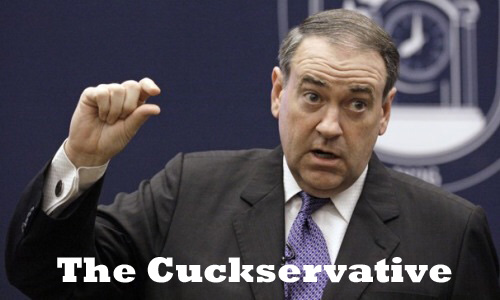 From the insurgent outlier party that went off the right-wing extremist deep end a while ago and keeps on going, now comes a disgusting new term that only warped minds could think up:

As Republican presidential candidates offered careful answers to questions about education, immigration and foreign policy at last week’s debate, streams of tweets panned their responses as too soft or disingenuous. Senator Marco Rubio is beholden to corporate interests, one said. Former Gov. Jeb Bush is weak on immigration, crowed another. Many of them were adorned with a cryptic hashtag bearing a new word: “cuckservative.”

The phrase has caught on among a segment of disaffected Republicans, some of whom hold white nationalist ideologies and who feel many of the party’s presidential candidates are not conservative enough. And they are frustrated by the willingness of Republicans in general to compromise on a variety of issues, like spending or the Confederate battle flag, or they accuse them of being beholden to their donors…

…But what does the word actually mean?

The implication is that mainstream Republicans, like jilted husbands, are facing humiliation and have lost sight of their futures.

The Southern Poverty Law Center, which monitors hate groups, called the term the “ultimate insult” that the white nationalist movement can deliver to politicians who they feel have veered too far to the left. “The term, at its core, may be racist,” the group said.

So this is seriously demented stuff, no doubt. What’s frightening is that the “community of conservatives who think Republicans should be racists” apparently constitute “a relatively sizable number of people” in the Republican base. Here in Virginia, there are numerous examples of these types. For instance, recently Shaun Kenney, the former Executive Director of the Republican Party of Virginia, called for a “long overdue” “Republican civil war” against “rank nativists and racists” in the party. Kenney specifically called out Jeanine Martin, but he could have just as easily mentioned many others, including that party’s 2013 gubernatorial nominee, Ken Cuccinelli, who infamously compared “our immigration policy” to breaking up “rat families.” Then there’s the chair of the RPV, John Whitbeck, who likes telling anti-Semitic “jokes.” Since we’re close to the 11th anniversary of George Allen’s famous “macaca moment,” let’s not forget him either. Let’s also not forget Republican Women of Clifton Make Racist “Joke” About “Barocky Road” Obama or Virginia Beach Republican Committee Chair Forwards Racist Email or…we could go on all day, really, and that’s not even counting national Republican racists and xenophobes like Donald Trump, the front runner right now for the party’s 2016 presidential nomination, along with his millions of rabid supporters.

So yeah, it’s no surprise that the party of the racist “Southern Strategy,” of “Willie Horton,” of Teabaggers holding virulently racist signs and chanting virulently racist slogans against the nation’s first African-American President at their rallies, is filled with racists, nativists, etc.

But what about the rest of the Republican Party? There are good, decent, non-extreme people there, right? Well…maybe not, if you consider that most of the 2016 presidential candidates (and most other Republican politicians these days) are happy to pander to the Koch brothers and what they stand for: massive taxpayer-funded corporate welfare/croney capitalism, the takeover of our (former?) democracy by the super-rich, the well-connected, the big corporations, the polluters, etc.

I mean, here in Virginia, the Speaker of the House, Bill Howell, is a prominent member of ALEC, another corporate front group whose goals including trashing our democracy and our planet. And Howell’s not an isolated case by any means; to the contrary, as far as I can determine, Howell represents the vast majority of the non-nativist, non-racist portion of today’s GOP. In short, add up the anti-“cuckservatives” and the Kochservatives (Kochsuckers?), and you have the vast majority of today’s Republican Party. What’s left? A handful of true “libertarians,” perhaps? Some non-racist, non-natives, non-Kochservative social conservatives and theocrats? A few remaining “country club Republicans” (although some of those are pretty close to, if not fully part of, “Kochservative” territory)? Anything else I’m missing? Yeah, it’s a hell of a party, today’s GOP. Let’s just all make damn sure they never win the White House…