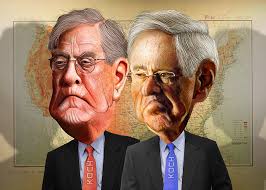 Imagine that you are a group of rich and powerful people eager to be still richer and more powerful. But you live in a democratic society that gives each citizen an equal vote and thus sets sets limit on how much power you can amass. So you decide to steal the people’s democracy.

How can this be done?

For starters, you would work to prevent the people from working together. As long as they can unite for common purposes, they can prevent you from gaining power over them.

Sowing hatred among them will work well to stop them from coming together. You don’t have to reach all the people–half will do. If one half hates and distrusts the other half deeply enough, that will suffice to ensure that the people will be unable to cooperate to achieve goals they have in common.

To sow this enmity, you will need a media system. Through that system, you continually tell the people who listen to you how terrible the others are. They are not your fellow citizens with a somewhat different point of view, you tell them. They are the enemy. They don’t love the nation; they have betrayed it. They want to steal your liberties and set up a tyranny over you.

Making one large group of basically decent citizens hate another large group of basically decent citizens requires getting people to believe many false ideas and “facts.” That’s not difficult in a totalitarian society where the ruling powers can block competing sources of information. But it’s a huge challenge in a democratic society where freedoms of speech and press give everyone access to information that can expose your lies.

This challenge can be met, however, by training the audience to listen to no one but you.

It also helps, in selling lies, to continually feed people’s fears because fear makes it more difficult for people to think rationally.

Those steps are important but not enough. If the system you’re trying to take over is based on “one person, one vote,” the people can still take control. As part of your strategy, therefore, you will work to take power in the election process away from the vote (where citizens are equal) by increasing the power of money (whose unequal distribution favors you).

The more that wealth is able to buy elections, the more you can pick the winners, and the readier the winners will be to serve you and not the people. If there are laws that limit the role of money in elections, you’ll need to work behind the scenes for years to place judges who will sweep those laws away.

Even that is not a complete strategy for maximizing your power.

So long as you don’t completely control the government, you’ll want to weaken its ability to regulate — in the public interest — those economic organizations that made you rich and powerful to begin with.

To weaken government as a potential check on your power, you will use your propaganda apparatus to persuade those citizens who get their view of the world from you to distrust government, to believe that the biggest threat to their liberties is not from your stealing their government but from government being “too big.”

In these ways, you can come to dominate and exploit what had been a free people.

[This piece will be running in newspapers in my conservative part of Virginia. I note that because it is relevant to my purpose to address not only those who agree with me, but also to challenge those on the other side. This embodies the strategy I recommend for this historic political battle against the force that has taken over the right: a strategy of “See the evil. Call it out. Press the battle.” (Showing people on the  right the dark truth about what they are supporting is one important way of pressing the battle.)

That is the strategy that I advance in my new book, WHAT WE’RE UP AGAINST: The Destructive Force at Work in Our World– and How We Can Defeat It.]