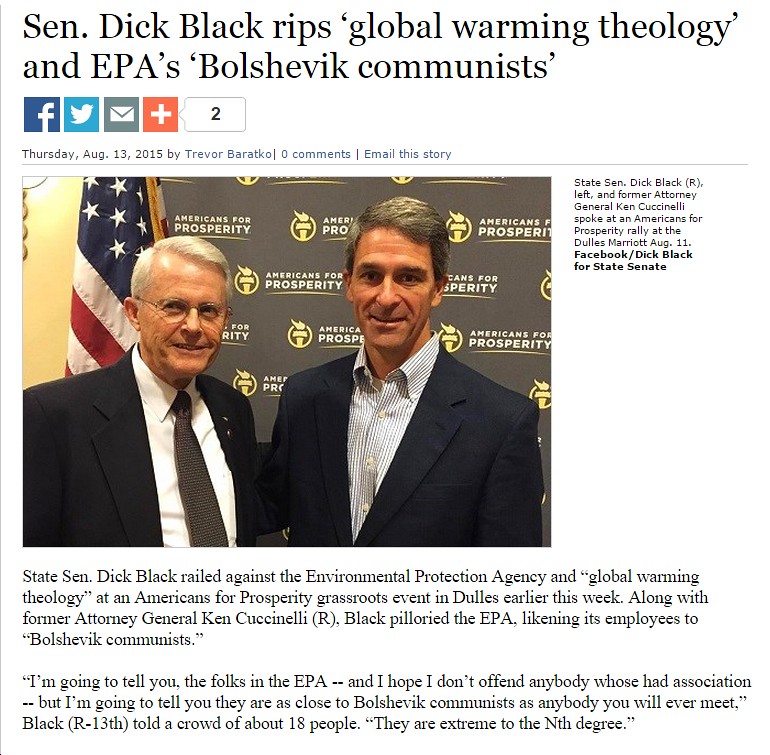 Just as an intro to this Loudoun Times-Mirror article, let me just remind you of who Virginia State Senator Dick Black is and what he’s said/done over the years. A few “highlights” include: What Is It With Loudoun Republicans?!? Dick Black on Spousal Rape, “Nighties,” etc., The Truth About Dick Black (e.g., called birth control pills “baby pesticides,” passed out “pink plastic fetus dolls to state lawmakers in 2003 in a creepy campaign to win votes for various anti-abortion measures,” called “An Embarrassment to us all” by John Feegel, a former Chief of Staff to the Republican Leader in the Virginia House of Delegates); Republican Loudoun-sanity Continues: Dick Black Rails Against Gays in the Military (“there was a young fellow who went to the showers at night, there were two homosexuals lurking — they were also basic trainees – and they strangled him with a towel and forced him to submit to, you know, things that we won’t talk about”); Sen. Dick Black (R-Homophobia): Polygamy “just more natural” than homosexuality; VA Sen. Dick Black (R) Praises “Extraordinary Gallantry” of Syrian Armed Forces, GOP Candidate Who Made Marital Rape Remarks Drops Out of Congressional Race, etc, etc. Oh, and just this week, PolitiFact Virginia slapped a “Pants on Fire” rating on Black for charging that his Democratic opponent, Dr. Jill McCabe, “supports selling late term abortions for bigger body parts.” Yep, the guy’s crazier than a s***house rat!

Now, add to that list Black’s belief, as reported by the Loudoun Times-Mirror, that the Environmental Protection Agency – set up by Republican Richard Nixon, by the way – is supposedly “as close to Bolshevik communists as anybody you will ever meet…They are extreme to the Nth degree.” Black also flat-out lies about the Clean Power Plan (CPP), falsely claiming that under it, “electric bills for individuals and businesses will go up 20 percent” (in fact, numerous analyses have shown that power bills will either stay roughly flat or actually go DOWN under the CPP). Black also dismisses global warming – which 99% of climate scientists agree is real, dangerous, and is caused by man’s burning of fossil fuel – as a “theology,” “kind of hokey,” and “silly from the outset.” He repeats a Big Lie favorite of crazy climate science deniers, that supposedly temperatures haven’t increased “in the past 17 years.” And he even manages to dismiss the booming clean energy industry, which has seen prices fall to the point that wind and solar are now cheaper than fossil fuels in many parts of the country, as “wind and solar scams.”

The bottom line: Dick Black is an extremist nutjob who has no business holding any public office, let alone State Senator. Fortunately, Democrats have an excellent alternative in Dr. Jill McCabe, who I urge everyone to support with volunteer time, donations, your vote (if you live in the district), etc. Come November, can we PLEASE say goodbye to Dick Black from Virginia public office once and for all?

P.S. Also note that Black was spouting these extreme and crazy views…yep, speaking of corrupt, at “an Americans for Prosperity grassroots event” (that’s an oxymoron by the way). Note that Americans for Prosperity is “a right-wing political advocacy group founded by billionaire brothers David and Charles Koch, the owners of Koch Industries,” and other fossil fuel interests. Not surprisingly, given that solar and wind are starting to eat fossil fuels’ lunch, that industry is not exactly friendly to clean energy, or to science which definitively proves that the product it peddles is destroying the planet…