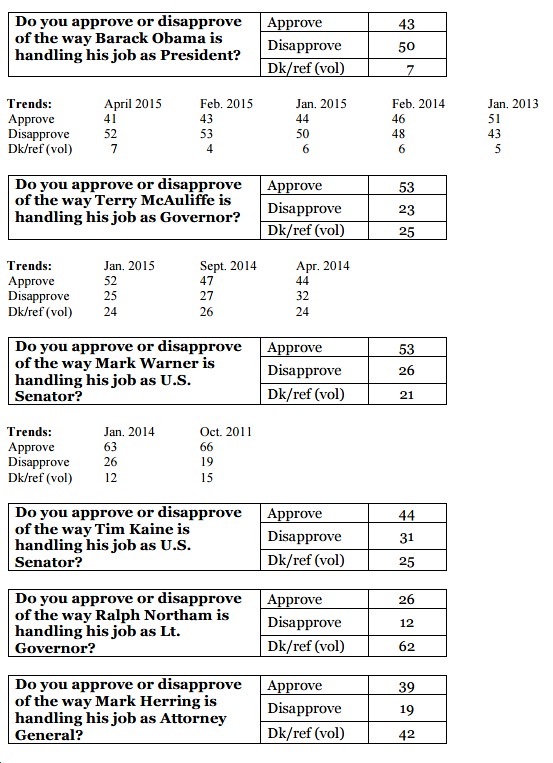 From the Wason Center for Public Policy at Christopher Newport University, these are results I expected on the one hand, but which make little sense on the other. Let me explain. First, I “expected” that most voters wouldn’t be paying close attention to our state’s legislative elections, even though I think that’s a big mistake (I’m strongly in the “think globally, act locally” school of thought; also believe that your vote and activism pack WAYYY more bang for the buck at the local and state level than at the national level).

Second, I “expected” that there would be, as there almost always is, a bigger “drop-off” of Democratic than Republican voters in these off/odd-year elections. Yes, it sucks, and there’s really no excuse for it, but it happens over and over again, so at this point – after 10+ years of closely following Virginia politics – I’ve pretty much built it into my assumptions. That, in turn (along with fundraising numbers and everything else I’ve been hearing), is why I heavn’t been particularly optimistic about Democrats’ chances of taking back the State Senate or of gaining many seats in the House of Delegates.

Finally, I did NOT expect that given the pronounced Republican lean of the electorate, that there would STILL be strong support for tougher background checks on gun purchasers, for reining in payday lenders, for raising the minimum wage, etc. So…Republicans are basically progressives on a bunch of issues, yet still vote for the party which is anti-progressive on all those issues? Got it. With that, here’s the Wason Center’s press release and some screen shots of their findings.

P.S. Interesting that Gov. McAuliffe and Sen. Warner are so popular, that Tim Kaine – who has been a real leader in the Senate, particularly on foreign policy – is less so,  and that so many people have no particular opinion about our state’s Lt. Governor or even higher-profile Attorney General (although both are in positive territory among voters who did express an opinion).

P.P.S. The challenge (problem?) with the CNU poll and ALL polls of the 2015 Virginia elections is to figure out “likely” voters. Not sure how accurate that is for any of the polls, and that’s really the key to low-turnout elections like this one: who will show up?

NEWPORT NEWS, Va. – Republicans have the upper hand among voters in the Nov. 3 General Assembly election, but Democrats may yet win back control of the Virginia Senate, according to poll results released today by the Wason Center for Public Policy at Christopher Newport University. 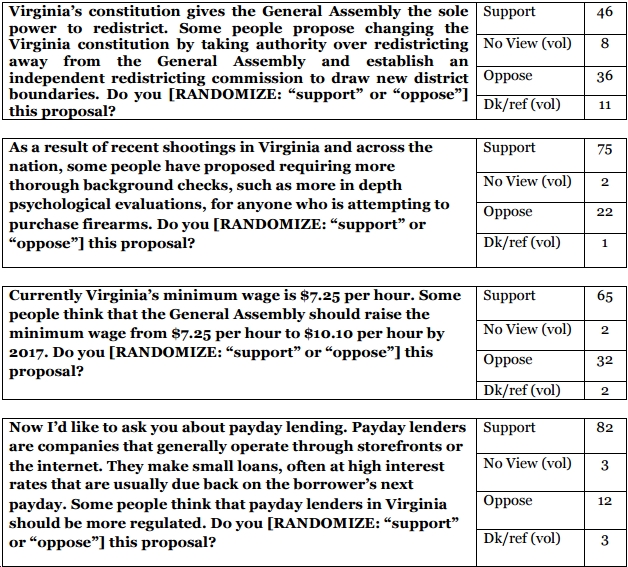 “Among all voters, Democrats and Republicans are statistically tied in the critical contest for control of the Virginia Senate, but among likely voters Republicans have an advantage,” said Dr. Quentin Kidd, director of the Wason Center. “However, these results also suggest that Democrats have time to engage their likely voters, especially in the six highly contested Senate races that will decide whether they can break the Republican hold on the legislature.”

“It’s not surprising that voters continue to be interested in the quality of education,” said Tom Kramer, assistant director of the Wason Center. “But the low concern over traffic congestion suggests that voters are seeing progress from those controversial increases in the gas tax and highway funding passed by Gov. Bob McDonnell and the Assembly in 2013.”

The Wason Center survey was based on interviews with 851 registered voters, conducted Sept. 15-23. The margin of error overall is +/- 3.4%.