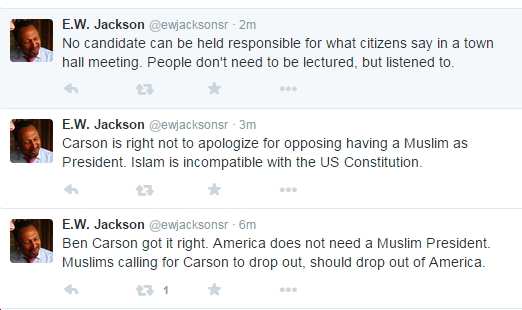 Here are a few national and Virginia news headlines, political and otherwise, for Monday, September 21.

*Political Split Awaits a Pope Who Is Hard to Pigeonhole

*Chinese Leader Arrives in U.S. at a Moment of Vulnerability

*Sanders scolds Carson for Muslim remark (“‘I would not advocate that we put a Muslim in charge of this nation,’ Carson said in an interview televised on NBC’s “Meet the Press” on Sunday.” What Carson said is absolutely unacceptable, not to mention un-American. It should be absolutely disqualifying even for CONSIDERATION for higher office in our country.)

*Right-Wing Media Can’t Believe Racist Trump Supporter Was Real (So now they’re denying this. In short, right wingers resolve their cognitive dissonance over anything they can’t process either by lashing out or by outright denying it ever happened.)

*Pope Francis’s actions speak louder than his words (“But seeing Francis only as a player in our political fights is misleading. To begin with, he is – both spiritually and politically – far more radical than most Americans, including most liberals.”)

*The Odds of a Shutdown Spike (“A budget expert puts the likelihood at 75 percent.” Because Republicans are fanatics on Planned Parenthood. Greeeeaaaat.)

*Editorial: True conservatives support environmental protection (Wow, this is coming from the Republican Times-Disgrace editorial board?!?)

*Stemming the tide of drug abuse (“A year ago, with heroin arrests rising in Virginia, the number of deaths nationally from overdoses more than quadrupling in 10 years, and prescription drug abuse increasingly leading to heroin addiction, the governor assembled experts to devise a strategy.”)

*Defending one of rural Virginia’s last bits of blue (“State Senate race in District 21 could determine which party controls the chamber.”)

*‘I lost part of my heart’: Beloved White House staffer Jake Brewer mourned (“Brewer, of Alexandria, was a senior policy adviser in the Office of Science and Technology Policy at the White House and previously worked as the director of external affairs at Change.org.”)