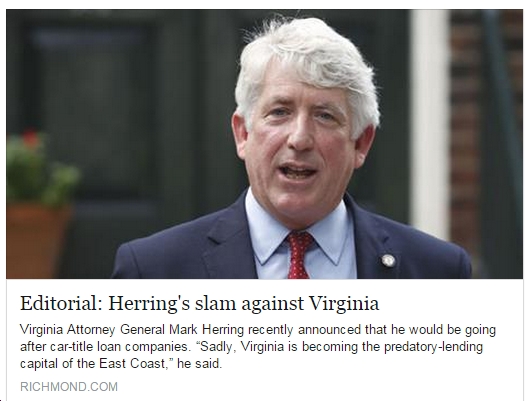 The Richmond Times-Dispatch editorial board has been so predictably right wing for so long that I call it the “Republican Times-Disgrace” for fun. This morning, though, the Times-Disgrace really outdid itself in illogic and idiocy, with its editorial Herring’s slam against Virginia. Here’s an excerpt just to give you a flavor for how brain-dead this “argument” is.

Virginia Attorney General Mark Herring recently announced that he would be going after car-title loan companies. “Sadly, Virginia is becoming the predatory-lending capital of the East Coast,” he said.

All that is fodder for a longer debate. For now, we’d simply like to suggest that Herring refrain from badmouthing the state he works for. We know he’s trying to polish his reputation as a champion of the little guy and all. But does he have to drag down Virginia’s reputation in the process?

Yep, that’s right; according to the Times-Disgrace editorial board, the fact that Mark Herring called out Virginia’s pro-predatory-lending policies and argued that these policies have made our state “the East Coast capital for predatory lending” somehow translates into a “slam against Virginia.” Not the disgusting predatory lenders or the politicians who made Virginia a welcoming home for those predatory lenders – they’re not the ones dragging down Virginia’s reputation. Nope, according to Times-Disgrace “logic,” it’s Mark Herring (or anyone else) who calls out the predators. To quote another right wingnut prone to wild leaps of illogic and idiocy: “argle bargle”…or maybe it’s “jiggery pokery?” LOL

In all seriouness, employing the “logic” employed by the RTD editorial board, nobody could ever criticize ANY current Virginia policy, however wrong/harmful it is, without being accused of attacking our fine state’s honor. In other words, think twice before you point out that Virginia remains top source of guns seized in New York or that Virginia’s tax code is regressive or that Virginia is one of the few states in the country which doesn’t automatically restore ex-felons’ voting rights or…you get the idea. I mean, you can mention these things (thank you First Amendment), but you run the risk of being attacked by the self-appointed Defender of Virginia’s Honor and All That Is Good and Great in the Old Dominion — the Republican Times-Disgrace editorial board, Defenders of the Realm Against Heretics Great and Small.

By the way, the fact that two other East Coast states – Georgia and South Carolina – also allow payday lending doesn’t mean that Virginia isn’t a major source – or even THE major source – of predatory loans on the East Coast. It would be interesting to see the statistics on the dollar value of such loans originating in Virginia vs. Georgia or South Carolina, but of course the Times-Disgrace editorial board doesn’t present those (that, of course, would require actual journalism).