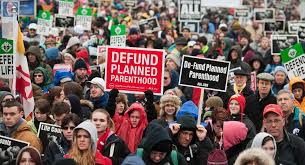 This piece is running in two installments in my conservative area of Virginia.

Part I: Demonizing Those Who Disagree

A two-part message I’d like to give to pro-life activists: 1) More than many liberals, I agree with you about the moral seriousness of abortion. But 2) I also believe that what you are doing with that issue in our nation’s politics is a big mistake that is damaging the nation.

And I bet that you will agree that I am right–if you will honestly follow my argument. That is my challenge to you.

First, where I agree with you.

I reject the too-easy argument (made by many liberals) that the abortion issue should be settled by the idea that “a woman has a right to control her own body.” She may well have such a right, but that argument skips over the central issue: when a woman is pregnant, something is there that is not “her own body.”

And the question on which the abortion issue hinges is: how should we regard that “something,” and what status should we give it?

Americans are divided on that question.

The answer that many in the pro-life movement give is that from the moment of conception, this “something” should be considered a “human being.” On that basis, they conclude that – because we regard a human life as sacred – the just-fertilized cell (and all its subsequent stages of development) is therefore entitled to all the human rights. Including of course the right to life.

Many on the other, pro-choice side believe that there’s an important difference, in terms of human status, between an ovum that has just been fertilized by a sperm cell and a newborn baby looking up at its mother’s face.

But — whether it warrants being called “a human life” in the early stages or not — it is nonetheless clearly something that, over time, is becoming increasingly human, and it is something that will become a human being if it is allowed to survive.

Surely, it seems clear to me, some moral weight must be given to that.

Unfortunately, these differences have damaged America’s politics in two ways: 1) one concerns how pro-life people feel about the people who judge these things differently from them; and 2) the other concerns how they deal politically with that difference in judgment.

A lot of pro-lifers, I have learned over the years, regard pro-choice people with moral disgust. And they assume that only immoral people would be pro-choice. The oft-heard statement that “one cannot be a Christian and a Democrat” – which translates as “no good person can be a Democrat because the Democrats are pro-choice” — captures this view.

My evidence comes from my fairly wide range of liberal friends, most all of whom are on the pro-choice side of the issue. Take it from me: in their lives, they are just as decent, caring, kind, responsible, and admirable as the good conservative and pro-life people I know. Likewise, their families — the goodness of their marriages, how well raised their children are and how well they turn out – are as excellent an embodiment of good family values as can be found on the other side of the abortion issue.

These pro-choice people would be just as adamant about protecting an infant from harm as people on the pro-life side. And evidently, the fact that they make a different judgment on the status of what they regard as not-yet-human is not indicative of whether or not they are, in general, good people.

So I would like to ask pro-life activists to consider: if good people can come to different judgments about abortion, doesn’t that imply something important about how we should regard each other, and that disagreement?

Does it not imply the need for some greater degree of mutual respect than “moral disgust”? And would such a change of attitude not make for a much healthier political environment than our unending battles over abortion have created? It is hard to work constructively with people you think are moral scum.

In the next installment, I will show why this is precisely the kind of issue that our founders sought – with the Constitution — to prevent from becoming political battlegrounds.

Part II: Political Battles over Religious Differences is Not the American Way

In the first installment of this two-part series, addressed to pro-life activists, I tried to show that it is inappropriate, and damaging to our nation, for pro-life people to assume that those who disagree with them on the issue of abortion are people of bad morals. The evidence just doesn’t justify that feeling.

In this installment, I will argue that this is the kind of issue that our founders wanted us to keep government out of.

Many pro-life activists base their positions on abortion on a variety of biblical texts that bear upon the issue indirectly.  (Indirectly, because the Bible is mute on the issue of abortion itself.) Even if one were to grant that the Bible clearly supports the pro-life position — and these texts do not seem nearly as clear and powerful as the biblical texts telling us to care for the needy and the vulnerable, which too many seem to take much less to heart — it would still be a mistake to battle over this issue in the political arena, as the pro-life movement has been doing.

Our nation’s founders were clear about our keeping government power out of our religious disagreements. These men were the heirs of a European history in which, not long before, Protestants and Catholics in Europe had killed each other for generations.

America’s founders wanted to create a political system in which religious differences would not be allowed to cripple and damage the society, but could be set aside to enable citizens of diverse beliefs to work together to better their country.

The Constitution’s guarantee of religious liberty, and its prohibition against the government to “establish” any religion, were not just for the sake of allowing individuals to be free. These were also key parts of the plans for creating a peaceful and successful society.

It’s not the American way to use the coercive power of government to impose the religious judgments of one part of the citizenry on everyone else. Our founders knew that this was a recipe for division and strife and the disabling of the political process.

Sure enough, with Americans having shown themselves irreconcilably divided on the abortion question for some forty years, this issue has poisoned our political process. And in recent years, even while Americans shared the need for action to address the worst economic crisis since the Great Depression, many state legislatures instead inflamed our enduring division over the essentially religious issue of abortion.

It’s not a matter of who is right. For more than two centuries, Americans have respected the right of other Americans to live according to religious beliefs they regard not only as wrong but as condemning them to hell for eternity.

In sum, my message to pro-life activists is this: Even if you’re right, in moral terms, in your view of abortion, you are making a mistake, in American terms, to turn this essentially religious issue into something to be fought out in the political arena to establish laws that government will enforce.

A final point: Consider the political force that has worked most consistently to inflame our differences over abortion and to put them into the center of our political process. It should be noted that it is the same one that has been working to steal our democracy by substituting the power of big money for the power of the people. Consider how well it serves their purpose to get Americans fighting on irreconcilable religious issues rather than working with each other to achieve our common purposes.

This is a fight that we should not be having. It may be painful to accept others’ making choices — based on beliefs that are different from yours — that your religion tells you are terribly wrong. But that’s an essential part of the American system of religious liberty.

My new book, WHAT WE’RE UP AGAINST: The Destructive Force at Work in Our World– and How We Can Defeat It is now available on Amazon.