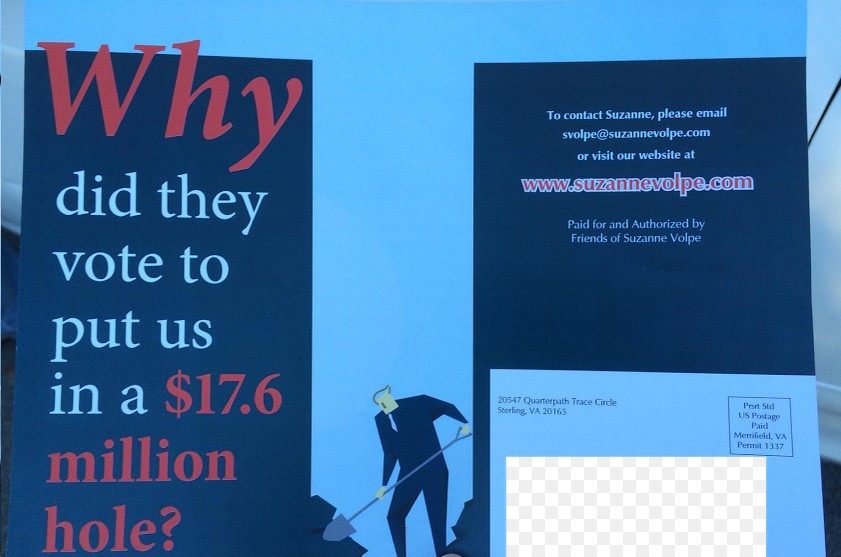 Bizarre mailer by Loudoun County Board of Supervisors member (from the Algonkian District) and staunch, right-wing Republican Suzanne Volpe. Why “bizarre?” Several reasons.

First off, note that the Loudoun County Board of Supervisors is unanimously (9-0) Republican, so when Volpe asks “Why did they vote to put is in a $17.6 million hole,” the “they” she’s referring to is her fellow Republican Board members, including Chairman Scott York. Why would Volpe, the former chair of the Loudoun County Republicans, be trying to defeat Democratic nominee Andrew Resnick by attacking her fellow Republicans? Is this some sort of weird “triangulation” or George W. Bush-style “strategery?” Just weird.

Second, note that since Volpe joined the Board in 2011, she and her colleagues have actually underfunded the Loudoun County schools by more than $90 million. So, finally, this year the Board voted to fully fund the schools, but she – along with her ally, extremist bigot and all-around freakshow Eugene Delgaudio – voted to continue stiffing teachers, students, music programs, arts programs, foreign language programs, the in-need-of-renovation Potomac Falls High School, etc, etc. In short, Volpe’s core argument here seems to be that she’s been so utterly incompetent and ineffective the past four years that voters should give her another four years. Make sense? Nope, didn’t think so. 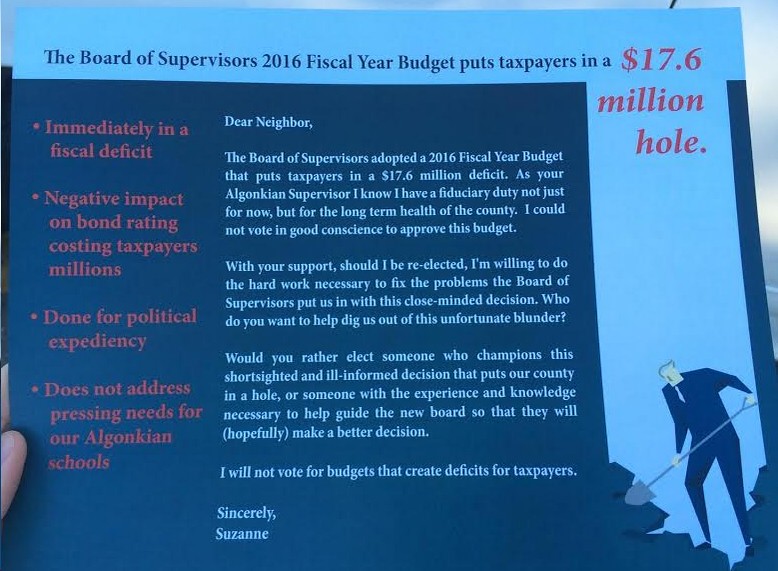 Third, note that despite being a former Republican Party chair, closely allied to fellow far-right-wing Republicans like Eugene Delguadio and Ken Cuccinelli (who was the star attraction at her campaign kickoff in 2011), her mailer doesn’t even mention the fact that she’s a….yeah, hard-core Republican.

To the contrary, the mailer is in a couple shades of Democratic blue, either intentionally or not. Of course, given that this is an Obama/Kaine district, and that 2013 Democratic House of Delegates candidates won the district’s precincts, it wouldn’t be surprising if Volpe wanted to hide her right-wing Republican leanings from voters. Thus, her attacks on a 9-0 Republican board in a blue-colored mailer. Very strange all around.

Finally, perhaps Volpe is flailing around incoherently, at least in part, to distract voters from her own abysmal record when it comes to ethics. That includes taking tens of thousands of dollars from developers, while opposing a government transparency law as well as an ethics pledge for the Board of Supervisors. Hmmmmm.

The bottom line in this race is that Volpe richly deserves to lose, and given the district’s political leanings, could very well lose, to Democrat Andrew Resnick. Note, by the way, that Resnick’s #1 issue is…yep, “fighting for our public schools,” something that Volpe has abysmally failed to do in her four years on the Loudoun County Board of Supervisors.