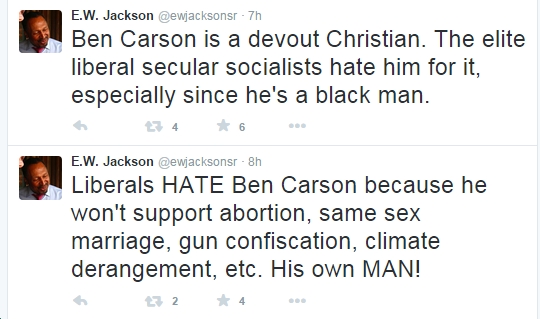 Here are a few national and Virginia news headlines, political and otherwise, for Tuesday, October 13. Also check out the latest unhinged rantings/ravings by the 2013 Virginia GOP’s Lt. Governor nominee. And no, E.W., the problem with Ben Carson has absolutely nothing to do with the fact that he’s a “devout Christian” (note: Jimmy Carter’s a devout Christian and most liberals, myself included, think he’s great), it’s that he’s a bigot, extremist, E.W. Jackson-level wacko, etc.

Eugene Robinson: The scariest GOP candidate (“Ben Carson truly seems to have lost his mind.” Seriously. the guy may literally be insane.)
The invisible candidacies of Jim Webb and Lincoln Chafee (Really weird.)
Democratic Debate Will Reveal Subtle Divides, if Not Wide Gaps
David Brooks (R): The Republicans’ Incompetence Caucus (“Basically, the party abandoned traditional conservatism for right-wing radicalism. Republicans came to see themselves as insurgents and revolutionaries, and every revolution tends toward anarchy and ends up devouring its own.”)
The Latest Unease on the Right: Ryan Is Too Far Left (This would be laughable if it weren’t so scary. Actually, it still is laughable!)
The agony and the ecstasy of the Democratic debate: Inside tonight’s high-stakes showdown (“With tonight’s debate a make-or-break event for some hopefuls, a candidate-by-candidate breakdown of what to expect”)
Ben Carson’s delusional fantasy world: The truth about victim blaming in the modern Republican Party (“The presidential hopeful, like many on the right, are clinging to a set of biases that blind them to reality”)
Washington’s Most Hated Man Loves Jeb (Dan Snyder and “JEB” Bush, what a combo! LOL)
Carl Pope: Another Tea Party Assault on Democracy
Rare salamander lies in path of proposed pipeline (Add that to the long list of reasons why this pipeline is a horrible idea.)
Virginia voters focus on presidential race, not General Assembly election
(“Voters here are paying far more attention to a race a year off than they are to the ones they’ll vote in three weeks from now, the student pollsters at Christopher Newport University are finding.”)
Register to vote; make a difference
Company seeks FAA approval for wind farm in Botetourt County
Todd Houck stole gun he used in murder-suicide
City Council, School Board meet for second time in 11 years
Roanoke’s first ‘food forest’ to produce fruit, learning (Very cool)
Forecast: Showers and clouds this morning, then sunshine through the week