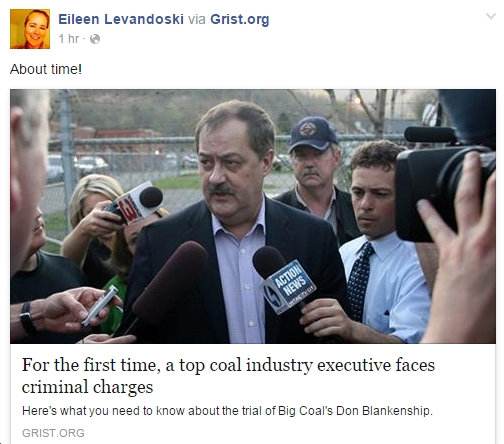 The autocratic, micro-managing, bludgeoning style that won throwback Appalachian coal baron Don Blankenship the ire of environmentalists, the fear of underlings, and the title “Dark Lord of Coal Country” from Rolling Stone may finally have caught up with him.

The opening arguments began today in Blankenship’s federal criminal trial. He faces charges of conspiring to avoid safety laws and lying to regulators that could put him behind bars for up to 31 years.

Blankenship’s downfall was triggered by the April 5, 2010, explosion at Massey’s Upper Big Branch mine, which killed 29 men and was the worst coal disaster in 40 years. Four separate investigations found that poor safety practices in the mine allowed for the explosion, which occurred when a spark from a longwall machine, which cuts huge slices of coal, ignited a pocket of methane, creating a fireball and triggering a bigger explosion when it hit piles of coal dust.

So yeah, this guy richly deserves jail time. It also reminds me of a post Ben Tribbett wrote on Not Larry Sabato – and that we linked to on Blue Virginia – right after that coal mine disaster. Ben’s key points at the time were spot-on: 1) Massey Energy [was at the time] based in Richmond; 2) Massey’s Knox Creek site in Tazewell County “was one of ten sites in the country to be cited for major health and safety violations last October”; 3) our fine Attorney General at the time not only was NOT cracking down on Massey, he was “actually working with Massey Energy on his lawsuit against the EPA;” and 4) Massey hearts Virginia Republicans, having donated $61,000 to Virginia Republicans in 2009 (“and $0 to the Dems”), not to mention $441,463 to Virginia Republicans since 1997 (just $8,250 to Democrats), including $40,000 to Bob McDonnell for Governor and $10,000 to Ken Cuccinelli for Attorney General. Ben concluded:

Now Ken Cuccinelli has a choice to make. Will he open up an investigation and ensure that the Massey mining site in Tazewell that has had so many violations of health and safety will comply with the law and ensure its workers safety? Or is he going to ignore safety warnings even after yesterday’s tragedy and hope by 2013 that Massey continues to reward him with large political contributions for his efforts to help in their legal actions against the EPA?We’re waiting for an answer Mr. Attorney General.

I think we all knew the answers to those questions in 2010, and we obviously know them now: of course corporate-worshipping Cooch ignored the safety warnings; of course he didn’t open up an investigation into Massey; of course he didn’t give us any answers. And of course, none of this is the least bit surprising, given that Ken Cuccinelli and others in Virginia government – overwhelmingly Republican back in 2010 – were deeply in the pocket of fossil fuel companies like Massey Energy and Don Blankenship, far more concerned with doing their bidding than in protecting workers, the environment, etc.

More broadly, as I wrote at the time, the question is why, in the year 2010, we were still stuck in a 19th-century energy economy (coal and other fossil fuels) instead of a sustainable/prosperous 21st-century one based on clean energy (energy efficiency, wind, solar, geothermal, etc.)? Also, why do we let scumbags like Massey Chairman/CEO Don Blankenship get away with murder – repeated, serious safety violations leading to the deaths of miners? On both of those questions, there’s a very simple answer: follow the money…

By the way, I recall that the reaction at the time by Virginia Republicans was: a) defensiveness; b) engaging in the time-honored strategy of “shoot the messenger;” c) their usual bull**** about how it was “too early” to talk about this stuff.  On that last point, note that for Republicans, it’s ALWAYS “too early” to talk about stuff – coal mine disasters, oil spills, gun violence, you name it – that they actually don’t EVER want to talk about; or more to the point, that they don’t ever want anyone but right wingers to talk about in the way THEY want to talk about it. Well, screw that. As for Don Blankenship, assuming he’s convicted (it would be a travesty if he isn’t), I hope he enjoys his well-deserved time in jail.