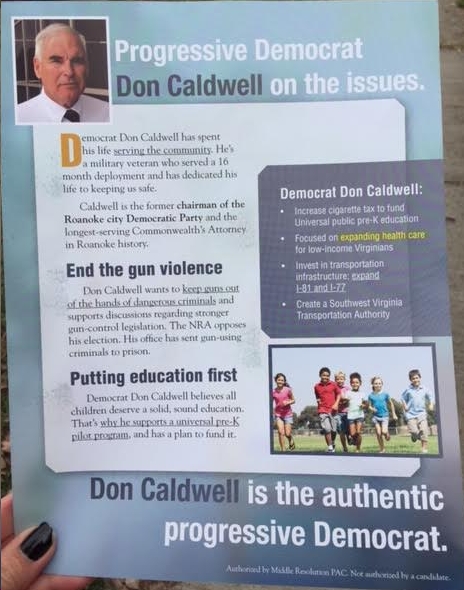 Yes, politics can be a dirty business, but this crap is really gross.

Former Roanoke City Democratic Chair, Charles Withers, sent out a phone message at the behest of the Democratic Party of Virginia to counter the flier.

The flier was targeted to Democrats praising independent Caldwell as the “Progressive Democrat” in the race and Democrat incumbent Sen. John Edwards as a conservative.

…The DPVA paid for recorded message said that the flier lied about Caldwell’s record to “fool you into voting for him and John Edwards will stand for our Democratic values in Richmond. So when you go vote on November 3rd remember to vote for John Edwards and that a vote for Caldwell is a vote for the Tea Party.”

…The objective of the flier was to fool the low-information Democratic voters into thinking Caldwell was more progressive than his Democratic opponent, Sen. Edwards. The hope is that just enough votes would be siphoned off from Edwards to Caldwell to give Dye the win.

Clever, eh?  Oh, and for a quick reminder of who these “Middle Resolution PAC” guys are, click here. A few highlights include:

So yeah, as the Roanoke Free Press explained very well, the flier pictured above (see the “Authorized by Middle Resolution PAC” line in small print at the bottom right of the flier) is a “head fake” by a far-right-wing PAC (and possibly the Republican Party of Virginia as well), aimed at enticing Democrats to vote for Democrat-turned-Independent Donald Caldwell, thereby helping boost right-wing Republican Nancy Dye, endorsed by no less than our pal Ken Kookinelli, to victory on November 3. So, bottom line, if you live in the 21st State Senate District (Roanoke City, Roanoke County, Montgomery County, Giles County), DO NOT FALL FOR THIS DECEPTIVE GARBAGE. On November 3, vote to reelect Sen. John Edwards, and tell “Middle Resolution” where to shove their deceptive, dishonest flier.