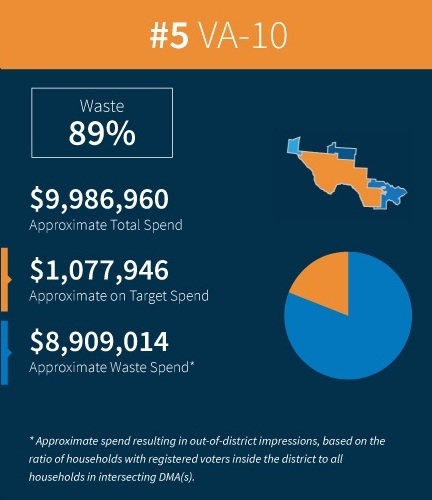 Short answer to the question posed in the headline: broadcast TV advertising for a State Senate or House of Delegates race is extremely wasteful, to the point that it basically can’t be explained in terms of rationality, logic, or just plain commonsense.

Check out that graphic (courtesy of Targeted Victory) on how incredibly wasteful broadcast TV advertising is in Virginia’s super-expensive (D.C-media-market) 10th Congressional district. It’s almost completely wasted, as I discussed in detail here.  Note that I had estimated “86% of a DC Metro market broadcast TV ad buy is essentially “bleed” — not reaching the targeted audience at all, ergo wasted,” which is extremely close to the 89% waste estimate by Targeted Victory. The question is, why would any campaign in its right mind do this?

Now, that’s for a full Congressional district, which has about 700,000 people living in it. How about for a State Senate district, such as the 29th (the McPike vs. Parrish race), where there’s $1.5 million being put into broadcast TV by Mike Bloomberg’s “Everytown for Gun Safety” group? Or how about for a single House of Delegate district, such as the 34th (Kathleen Murphy vs. Craig Parisot) or the 86th (Jennifer Boysko vs. Danny Vargas)? Keep in mind that a single State Senate district in Virginia has about 1/40th the state’s population, or around 200,000 people. And a single House of Delegates district has about 1/100th of the state’s population, or about 80,000 people.

Both of those, you might note, are far smaller numbers than that 700,000 or so in a U.S. House of Representatives district. Which means, of course, that the wastage rate for broadcast TV ads will be far, far worse for a single State Senate or House of Delegates race than for a Congressional race, such as the 86%-89% waste seen in VA-10. I mean, we’re talking upwards of 95%+ wastage on this stuff.

Which again raises the question as to why anyone (other than the folks who make the TV ads, buy the TV ads, see the ad revenue flowing to their TV stations, etc. — they LOVE this!) would throw their money away like this, instead of investing in things you can target: phones, door knocking, digital advertising, mailers to an extent, maybe even old-fashioned newspaper ads or even radio. One theory with the “Everytown” folks is that their spending now is more message testing for next year than anything else. I suppose that COULD make sense, but at least use the money on a medium where it has a fighting chance of being effective, getting SOME bang for the buck, not the flamboyantly wasteful (hey, let’s throw our money away advertising to Maryland, DC, and the vast majority of places in Virginia that are NOT the targeted race!).

Even more bizarre are the Republicans spending tons of money on D.C.-media-market broadcast TV ads targeted at individual House of Delegates races — each one comprising 1% of Virginia’s population. Brilliant, eh? I mean, again, there are many other ways for them to get their message (a wildly dishonest one on Gov. McAuliffe’s plan for congestion tolling on I-66,, but whatever…) out there. Of course, if Republicans feel like wasting tons of money, that’s fine with me, and I hope they keep doing it, but again, why? Can anyone explain this seeming idiocy to me? Thanks.