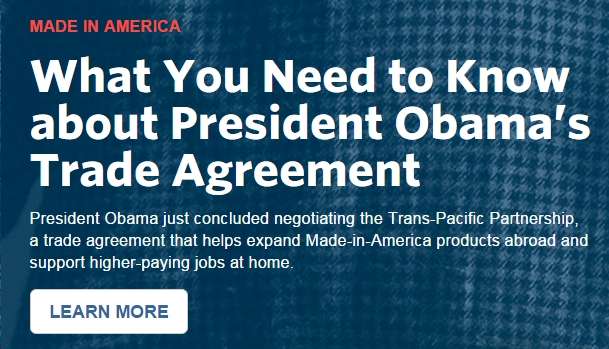 Big news this morning — no, not the firing of Nationals Manager Matt Williams (I’m fine with that, by the way; now need to get rid of Papel-bonehead as well), but the deal reached on the enormous Trans-Pacific Partnership (TPP) trade deal.  I studied international economics in graduate school, and the brainwashing  much of what I learned regarding the benefits of trade still sticks with me. On the other hand, over the years, I’ve become increasingly concerned with the potential impacts of trade deals – or more to the point, poorly-conceived and/or poorly-executed trade deals – on: a) human rights; b) the environment; c) labor rights. The way I see it today is that the economic benefits of trade, on balance, are still an important consideration in considering whether or not to support trade deals like the TPP, but they absolutely must be weighed with those other considerations as well.

With that, here’s some information I’m seeing this morning that’s not determinitive, but which does make me feel more encouraged about TPP than I did a few weeks/months ago.

So…at first glance, most of this sounds great if it’s truly what’s in the deal and is enforceable. If so, I’d be highly inclined to support the TPP. If not, I wouldn’t.  What do you think?  To TPP or not to TPP? 🙂