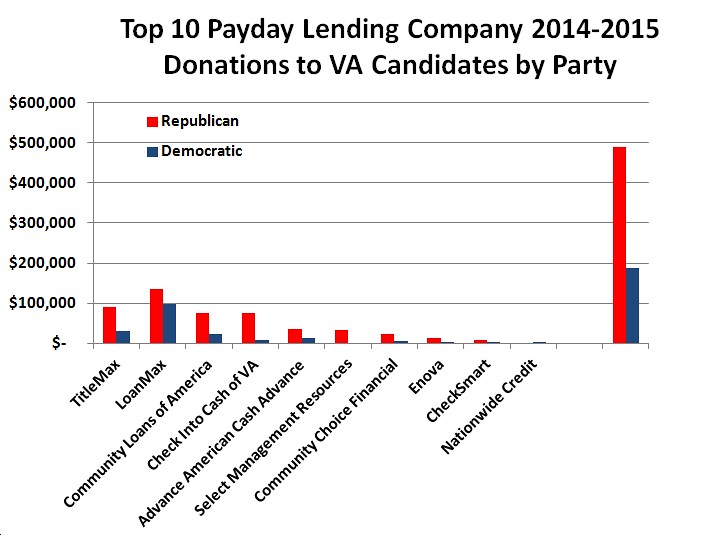 As many of us know – and all of should know – the Virginia Public Access Project (VPAP) provides a wealth of information about where Virginia political candidates, incumbents and parties get their money. For instance, you can find top donors by occupation, such as the top donors by industry, and you’ll find lots of fascinating information that helps explain why our politicians act the way they do (“follow the money!”).

One industry that donates a LOT of money to Virginia politicians – particularly of the Republican persuasion – is the predatory car title/payday lending industry, one of the worst industries out there (along with tobacco, guns and fossil fuels).  Fortunately, leaders like Scott Surovell, Mark Herring and others have been fighting back against these predators (see Video: AG Mark Herring, Del. Scott Surovell Speak Out Against Predatory Lenders from September 12), but it’s a tough fight as the lenders are well heeled and well connected.

By the way, for more on this industry and the damage it does, see Michael Pope’s recent, superb series on this topic. Among other things, Pope reveals that, “Although car-title loans are capped at 264 percent interest and limited to a year, about a quarter of the money loaned by the industry evades those regulations and comes with no limits on the interest rate or duration of the loan.” Also, “The number of cars being repossessed has doubled in the last three years, and that’s just the ones regulators are tracking.” And also: “residents from D.C. and Maryland flock to Northern Virginia — lured by the promise of quick cash. But many fall into a debt trap.”

Anyway, the bottom line is that this industry is one of the worst around. So it’s interesting to see who they’re donating to here in Virginia. For starters, as the above graph illustrates, the top payday and car title lenders donate heavily – by a nearly 3:1 ratio – to Virginia Republicans over Democrats. That alone is very telling. Just in 2014-2015, for instance, one of the biggest of these predatory lenders – Anderson Financial Services/LoanMax of Alpharetta, Georgia – has given $135,000 to Virginia Republicans and $97,040 to Virginia Democrats.

Another big predatory lender, TitleMax, has given at a 3:1 clip to Republicans ($91,500 vs. $31,000) in 2014-2015. Not surprisingly, the top Democrat (sigh…) getting money from these slimeballs is our old pal Dick Saslaw. Other than that, it’s mostly a “who’s who” of Republicans — Terry Kilgore, Tim Hugo, Bill Howell (and more to his “Dominion Leadership Trust” PAC), Jackson Miller, Dave Albo, Greg Habeeb, the House Republican Campaign Committee, the Virginia Senate Republican Caucus, etc. Also see donations by Community Loans of America, which has given at slightly more than a 3:1 clip to Republicans (they looove Tommy Norment, Bill Howell, Frank Wagner, Mark Obenshain, etc., plus of course Dick Saslaw and  soon-to-be-ex-Delegate, “Democrat” Johnny Joannou).

Anyway, just thought you’d be interested to know where the payday and car title lenders like spreading their dirty money around in Virginia – heavily to Republicans.  Keep that in mind when you go vote on November 3!