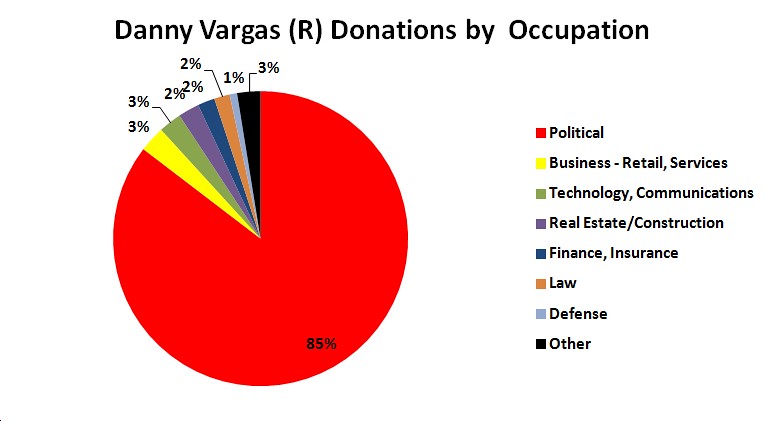 As I noted earlier today, you can look through the Virginia Public Access Project (VPAP) and find all sorts of fascinating information, including contributions to political candidates and incumbents by industry/source. This morning, I was focused on payday/car title lenders. Now, I’m focused on candidates who get the overwhelming amount of their campaign funds NOT from local or grassroots supporters, but from political parties and PACs.

One of the most extreme examples of this comes with Republican Danny Vargas, running in the 86th House of Delegates district (a district centered around Herndon in Fairfax County that went overwhelmingly for Obama, Kaine, McAuliffe/Herring/Northam and Warner) against Democratic nominee Jennifer Boysko. In Vargas’ case, a whopping 85% (!) comes from the category called “Political,” with $204,339 of his money coming from that source (the next highest category for Vargas is “Business – Retail, Services,” with just $6,790, nearly $200k behind “political”). Among those political donors are: House Speaker Bill Howell ($60k), the Republican State Leadership Committee ($50k), House Majority Leader Kirk Cox ($10k), Terry Kilgore ($10k), etc.

Note that, other than $34k from Tom Rust, Vargas’ political money is not local or grassroots. Bill Howell, for instance, gets his money from a “who’s who” of corporate Virginia – bankers, real estate interests, alcohol, coal companies, etc. That’s the money that Howell is donating to candidates such as Danny Vargas.

It’s certainly a stark contrast to Jennifer Boysko, who gets her money from a much wider variety of sources, including “non-wage earners,” “retired,” “artists/authors,” “non-profit employees,” government employees, police and firefighters, etc. In other words, Boysko’s donations look much more like the community she’s running to represent, while Vargas’ look overwhelmingly like Republican Party/PAC money, which itself overwhelmingly comes from big corporations and trade associations. Which would you rather have representing you in the Virginia House of Delegates?

By the way, in looking through VPAP, it’s hard to find anyone with as great a political “skew” as Vargas. One that jumps out is Republican Joseph Yost, who over his career has received an enormous $874,740 from political sources, FAR ahead of the $53,750 he’s gotten from health care sources. Another is Republican Ron Villanueva, who has gotten $677,238 from “political” sources over his career, with “real estate/construction a distant second at $107,001. And check out Republican Mark Dudenhefer, who has received $256,969 from political sources, with technology/communications in second place at $92,981.

In other words, there are plenty of candidates who receive a lot of money from political parties and PACs, but none as lopsided as Republican Danny Vargas. The question is, why is that? It certaily makes one wonder who this guy is beholden to…