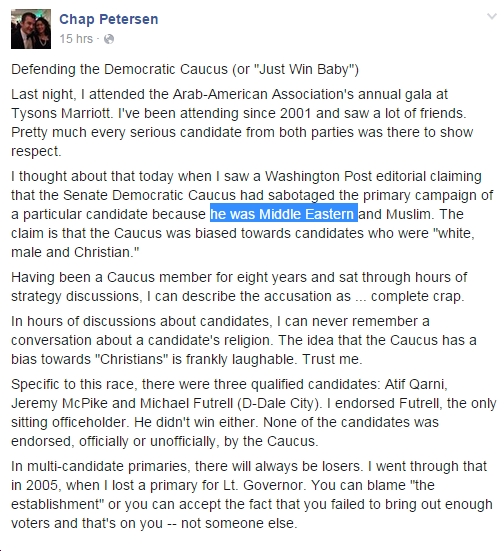 Interesting Facebook exchange the past couple days between Sen. Chap Petersen and Atif Qarni, who ran for the Democratic nomination for State Senate earlier this year and who published an op-ed in the Washington Post this past weekend (NOT a “Washington Post editorial” as Chap Petersen erroenously states; huge difference). Highlighting added by me for emphasis.

You missed the point of the op-ed. We have an issue in our country on how Muslims are treated. This is not a Republican or Democratic problem, it is an American problem.

Having said that, there is much more of an Islamophobia/bigotry problem in the Republican Party than the Democratic Party. But, we can’t look the other way when this happens in our party. We have a responsibility to stand up if something is not right. I see an issue that plagues our party. And if I have to be the bad guy and state it openly, so be it.

You state that I am “claiming that the Senate Democratic Caucus had sabotaged the primary campaign of a particular candidate because he was Middle Eastern and Muslim”. Where exactly is that in the op-ed? I suggest you read the op-ed again.

Also, I am of South Asian background, not Middle Eastern. This in itself is a problem that you can’t distinguish between the two, given that you are an elected official from Northern Virginia from a District that is very diverse.

In the op-ed there was no discussion of the result of the primary. I discussed the process and how it can be challenging for Muslims running for office.

You have a valid point in that I did not bring out enough voters to win. That could be because I did not knock on as many doors as I should have, or I did not raise enough money to get my message out, or I did not utilize other means of communication like social media, because I was relying on a good showing from non-traditional primary voters.

A mistake you make is that this is an op-ed not an editorial. The Washington post gives us a 800 word limit, and my piece is exactly 799 words. If the Post gives me an opportunity, I would be happy to point out every single detail of the primary.

There was bias in this race. Religion was brought up. The claims I make in the op-ed are accurate. I brought up these concerns with several people–including some people you know well, but the typical response, was “this is politics”. People are too afraid to stand up to people like Dick Saslaw. I teach my students that being a bystander is as bad being a bully.

You supported Michael because you know him well. Adam supported me because he knows me well. Jeremy was supported by people who he knows well. However, the scales were tipped by the “unofficial” support from certain State Senators and their donors. In the primary vast majority of the money for Jeremy came from donors who he did not know prior to the primary. During call time I called a lot of big donors in Northern Virginia. The typical response I got was that they would stay out of the primary or they will talk to Dick Saslaw. If you look at where Jeremy received most of his money was from these donors. These are donors who give to the Senate Caucus. You can deny that caucus is not playing favorites, but the proof is in the pudding.

Very few in our party have way too much influence and power. And if they are close minded then it has impacts on a lot of people.

You should not be surprised by this op-ed– given that similar things like this have happened to others in the past. Others just have lacked the courage to say something because they would get a lot of blow back. Just like the knee-jerk reaction you are displaying.

Since this op-ed I have received emails, messages and calls from many Democrats who feel they same way as me. We have a problem and you can push it under the rug, or you can acknowledge it and try to resolve it.