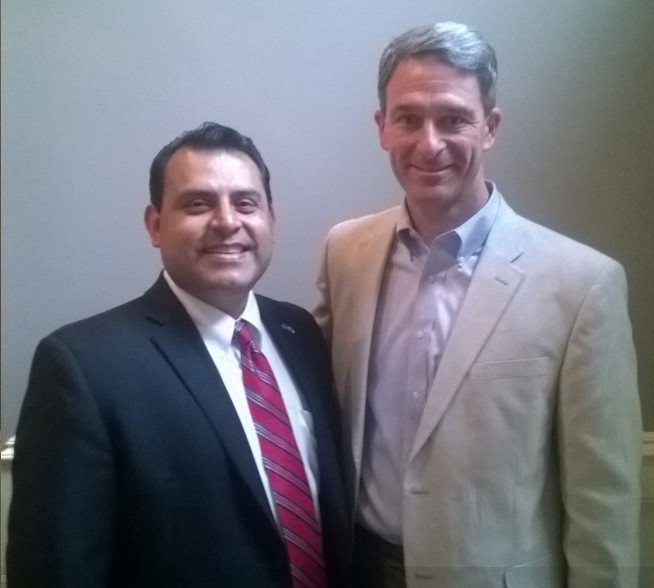 For those of you who haven’t been following this contest, John Guevara is the Tea Party extremist running for Fairfax County Board of Supervisors against Democratic nominee Kathy Smith in the Sully magisterial district. Over the weekend, the Washington Post strongly endorsed Kathy Smith, and totally slammed Guevara. Check it out (bolding added by me for emphasis).

Sully District. The departing six-term incumbent, Republican Michael R. Frey, has been a constructive consensus-builder. The Republican vying to succeed him, John P. Guevara, a technology consultant, is cut from different cloth: He has ranted against advocates who would put illegal immigrants on a path to citizenship — though his parents, originally illegal immigrants, eventually became citizens — and suggested that the federal government regards  conservatives as terrorists. That kind of toxic rhetoric would be unhelpful on the county board, as would his stated desire to arrest day laborers and his insistence that some public school programs are wasteful — though which ones he cannot say. His Democratic rival, veteran school board member Kathy L. Smith, is a better pick — and easily the more informed candidate.

Anyway, so I can understand why Guevara might not be thrilled about this endorsement. But his reaction is as over the top as you’d expect from a wild-eyed, far-far-right-wing Tea Partier.

CHANTILLY, VA – Today the John Guevara for Supervisor campaign demanded a retraction and apology from Lee Hockstader and the Washington Post for a vicious attack on John’s parents calling them “illegal immigrants” when they came to the United States legally. The attack on John and his parents also attribute positions to Guevara on immigration that are flat out lies.

“I am a first time candidate so this came as a shock to me that a newspaper would just flat out lie about your positions and attack your parents. But I am learning quickly that the disdain for the Washington Post in many circles is well deserved,” said Guevara. “That is why I have sent a letter to the Washington Post demanding an immediate retraction and apology to me, my family, our campaign and supporters.”

In an article produced by the Editorial Board and fueled by questionable journalist Lee Hockstader’s shoddy research, the Washington Post’s vicious attack asserts that because John’s parent’s immigrated from Mexico, that they did so illegally. They were in fact legal immigrants.

Born to Mexican parents who immigrated in 1970, I am the first in my extended family to graduate from college, receive a military commission, raise a family, and have a successful career in IT management. But none of these achievements would be possible had it not been for the Immigration Reform and Control Act of 1986. Yes, my parents were direct benefactors of the Reagan Amnesty.

Now, before you say, “here he goes, he’s for Obama’s amnesty” keep reading. Unlike a VAST majority of Hispanics who are here illegally today, my parents were productive, law-abiding, and tax-paying residents. These were provisions clearly stated in the law that needed to be met in order to be considered for such amnesty. Additionally, my parents NEVER took one red cent from the welfare system, despite being overwhelmingly qualified.

That’s right, Guevara himself wrote last fall – in a vicious, filled-with-wild-falsehoods, anti-“illegal immigrant” screed – that his own parents were in the country “illegally” and were “director benefactors [sic; I think he means “beneficiaries,” as a “benefactor” is “a person who gives money or other help to a person or cause”] of the Reagan Amnesty.”  In short, Guevara was either lying then, lying now, or both. Regardless, he certainly shouldn’t be elected to the Fairfax County Board of Supervisors, if not for his inability to tell the truth, then for his extremist views.  This one’s a no brainer if there ever was one: if you live in the Sully District of Fairfax, vote Kathy Smith on November 3!