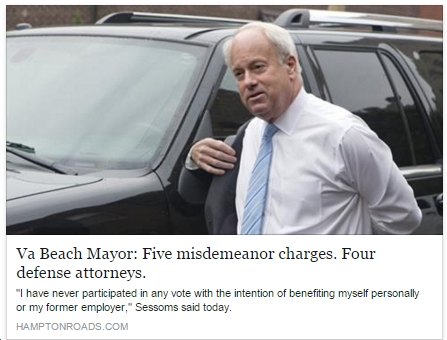 See below for a great post by Charlottesville journalist/radio host Coy Barefoot on his Facebook page; truly disturbing on a number of levels — failing to crack down on corruption by public officials, punishing the reporter who broke the story (!), etc. I’d just add that if what Sessoms did was illegal — and I’m not saying it wasn’t, or that it SHOULDN’T be if it isn’t for some crazy reason — then a lot more Virginia politicians should be in serious legal jeopardy as well…

meanwhile, the Mayor of Virginia Beach is finally facing charges for his voting favorably on development projects and other deals that benefited clients of a specific bank where he happened to serve as President. (which is illegal, by the way).

The bombshell was broken by investigative reporter John Holland last fall in the pages of the Virginian Pilot (I’ll put a link on the jump). What was the result of the reporting? A full year later, Sessoms faces only five misdemeanor charges— and has hired no less than FOUR top lawyers to defend him). EVEN IF convicted of illegally mishandling the power and responsibility of his office, he will not have to resign.

And the Columbia Journalism Review reported earlier this year (http://bit.ly/1OzngAd) what happened at the Virginian Pilot newspaper as a result of their breaking this story: upper management cracked down and discouraged any investigative reporting that might embarrass the powers that be in Virginia Beach. “As one veteran journalist at the paper put it: “We’re walking around with duct tape over our keyboards.”

None of this comes as any kind of surprise to those of us who’ve been closely following the stories of Virginia Beach over the years. Oh, and that Virginian Pilot reporter who broke the story about the Mayor? This week his byline at the paper’s website reads “Former Pilot Reporter.”