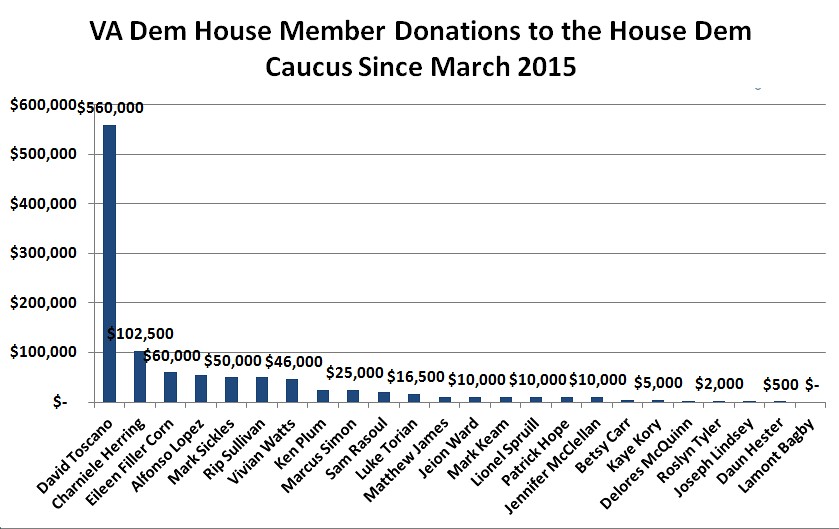 Check out the graphic for an estimate of how much Virginia Democratic House of Delegates members have donated to the Virginia House Democratic Caucus since March 2015. Note that I am NOT including on this graph several categories of delegates: a) those who are leaving the House, whether to pursue higher office (e.g., Scott Surovell, who was just elected this past Tuesday) or to retire (e.g., Rob Krupicka, Mamye Bacote) or whatever (e.g., DINO Johnny Joannou was, thankfully, defeated at long last); b) those who were in competitive races (e.g., Kathleen Murphy, Monty Mason, David Bulova), ergo were “donees” not “donors” this year; c)  anyone who’s not officially in the House of Delegates yet, even if their elections were shoo-ins (e.g., Mark Levine, Paul Krizek, both of whom won on November 3). With that caveat, on to the numbers…

As you can see, House Democratic Leader David Toscano is far ahead of anyone else in the caucus, having given $560k to the caucus since March 2015. Impressive. After that, there are a few others giving good amounts to the caucus.

I suppose we could start another tier around now, with folks like:

Obviously, it’s not good to see any Democratic House members give little if anything to the caucus. Even worse are members in safe/deep-“blue” districts or who serve on committees like Appropriations (Dem members this past session were BaCote, Torian, Hester, Sickles, James, Carr, and DINO Joannou) or Commerce and Labor (Dem members last session were Joannou, McClellan, Ward, Tyler, Spruill, Keam, Filler-Corn), where it is easier/expected for them to raise money.

Finally, it’s interesting to look at members’ cash on hand compared to how much they are giving to the caucus.  For instance, Del. Filler-Corn has a good amount of cash on hand ($100k) and also gave a lot ($60k). Del. Rasoul has a bit less money ($80k) than Del. Filler-Corn but gave $40k less than she did. Also worth noting is Del. Joseph Lindsey, who has $54k cash on hand but has given just $1k since March. Then you have someone like Del. Marcus Simon, with just $22k on hand, but who has given $25k since March.  You also have people who simply don’t do much fundraising at all (e.g., Bagby, Hester, Hope). Anyway, it’s a mix of things, but the bottom line is that all members – other than those with truly extenuating circumstances – should be contributing to the caucus, preferably in the $20k+ range or higher. If they’re not doing so, the question is why not?