Can we say “dumber than dishwater?” Check it out, and ask yourself whether pushing ahead with gigantic new natural gas pipeline infrastructure is a wise decision, either short-term or expecially long-term, for Virginia.

Efforts by utilities to buy U.S. natural-gas pipelines to make up for lackluster power use could be upended if the shift toward renewables accelerates.

Duke Energy Corp., Dominion Resources Inc. and Eversource Energy are among companies spending billions to expand into pipeline networks that link distant gas-producing regions to areas where demand is increasing.

It’s a hot deal at a time when coal-fired power plants are getting shuttered, nuclear stations aren’t being built and gas-fired generators are picking up most of the slack. Their bets may prove riskier than they think if improvements in battery storage and ever cheaper wind and solar power edge out gas-fired generation in electricity markets, according to one former energy regulator.

“These utilities are taking a risk that these will be stranded assets that ultimately their shareholders will have to pay off,” Jon B. Wellinghoff, a San Francisco attorney who served as chairman of the Federal Energy Regulatory Commission from 2009 to 2013, said by phone. “We will see regulators being more critical of these asset decisions as prices of renewables continue to go down.” 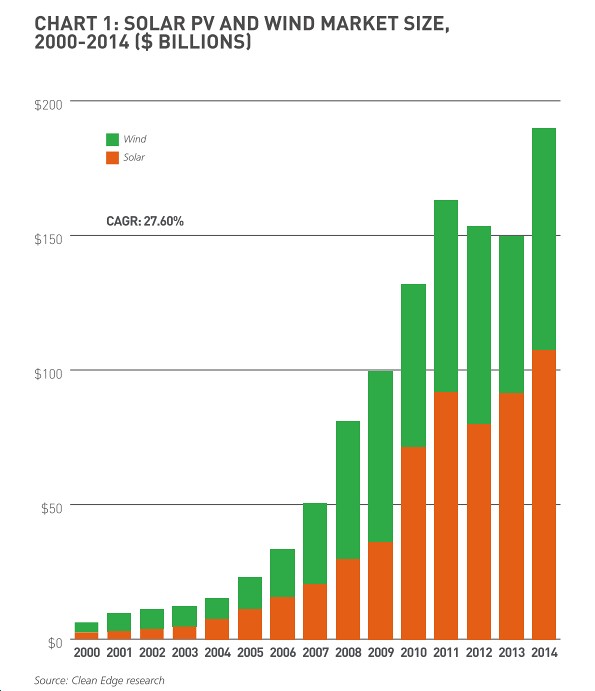 Oh, and guess what? That’s right, the shift towards renewables IS acclerating.  Check out the graphic from a brand new report by CleanEdge, entitled “Getting to 100: A Status Report on Rising Commitments Among Corporations and Governments to Reach 100% Renewables.“

Clean energy prices are plummeting too, as “competitive, low-cost renewables are increasingly becoming the norm for new generation capacity in many regions and geographies, achieving the goal
of grid parity with traditional fossil-fuel energy sources, and providing a hedge against volatility in conventional energy markets.”

And none of that even gets at the climate crisis (note: the earth just passed 400 parts per million, “a 43 percent jump in greenhouse gases since pre-industrial times and underscores governments’ inaction and worsening global warming impacts,” which means – in short – we absolutely CAN NOT CONTINUE like this.) Given all that, why would anyone in their right mind actually CHOOSE to lock in fossil fuel infrastructure, when there’s a high likelihood that infrastructure will be obsolete, “stranded,” a huge waste of money, whatever you want to say, within a few years? Right, nobody with any sense would…other than the fossil fuel industry itself, fossil-fuel-heavy utilities like Dominion, and the politicians they’ve bought and paid for.