At Monday’s “After Virginia Votes” event at GMU in Arlington, one of the topics for discussion was – not suprisingly, given its central role in the 2015 elections – the Dan Gecker vs. Glen Sturtevant race in the 10th State Senate district (Richmond City, Chesterfield and Powhatan Counties).

I wrote about this race last Saturday in Could Strong Progressive Emily Francis Have Won the 10th District…and Democratic Control of the Virginia State Senate? In that piece, I reported on what I found in crunching the numbers:

So…what is Common Good VA (Gov. McAuliffe’s PAC) Director Brian Zuzenak talking about when he claims, “Richmond turnout was 76% higher than it was in 2011, which is an astronomical number?” Got me, based on what we laid out above.

So, given that I’m stumped, I asked a leading Richmond-area Democratic politico what they thought of Zuzenak’s analysis. Here’s their (slightly edited) reply: 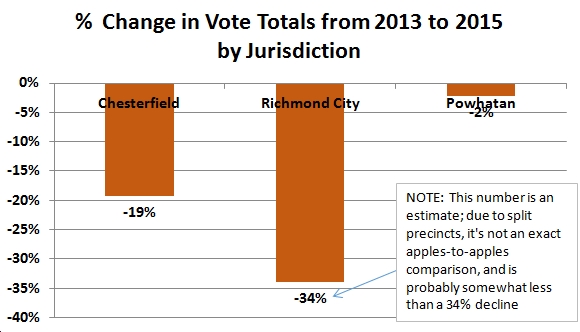 I completely disagree with the “back-patting” on the Richmond turnout increase. Yes it was up from 2011. OF COURSE the percent turnout was up from 2011. 2011 was not a seriously contested race! People who voted in 2011, voted to make a statement against John Watkins or out of pure civic duty…knowing exactly who was going to win that race. That is a very different dynamic than actually have a contested race in an open seat.

Clearly, the better comparison is with 2013 — look at the percentage drop off. The bottom line is that Democrats did NOT turn out in this election in the numbers needed. To an exztent, of course, this is an institutional/systematic issue (e.g., more voter registration, stronger committee work, neighborhood organizing), but it’s also a candidate issue, in that Richmond residents need to be motivated by the Democratic candidate to mobilize. The flip side is that Republicans (right now) are just better, more regular voters than we are. We need to change that.

Bottom line: Democrats failed this cycle in SD-10 to excite our base, including in Richmond, and that was Dan Gecker’s undoing. And no amount of spin by smooth political operatives can change that fundamental fact.