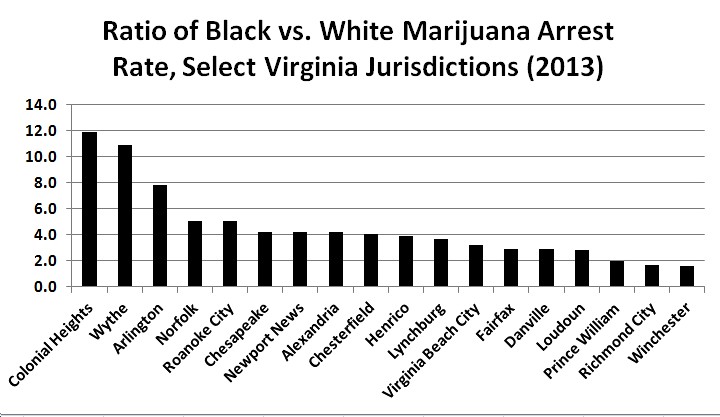 I read this article by Tom Jackman in the Washington Post about the new study, Racial Disparities in Marijuana Arrests in Virginia (2003-2013), and was utterly appalled at the key findings.

While the trend in much of the United States is moving toward decriminalization or legalization of marijuana, Virginia is heading in the opposite direction: With sharply rising arrest totals for the possession of pot and a disproportionate number of black people arrested in the Commonwealth, according to a new study based on state data reported to the FBI.

Although marijuana arrests dropped 6.5 percent nationwide between 2003 and 2014, possession arrests in Virginia increased by 76 percent during that period, according to research by the Drug Policy Alliance in New York. And arrests of black people in Virginia for marijuana increased by 106 percent from 2003 to 2013, accounting for 47 percent of the state’s arrests even though Virginia’s population is only 20 percent black.

Looking at the study itself, the results only get more appalling, particularly in certain Virginia jurisdictions. A few key points that jumped out at me include: 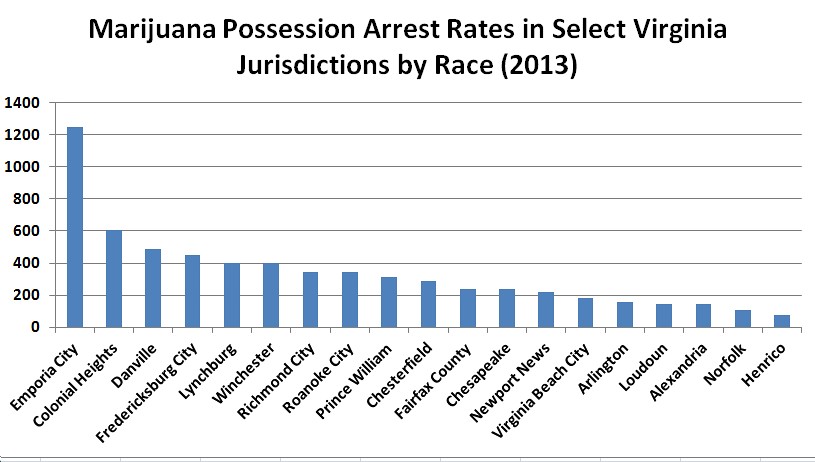 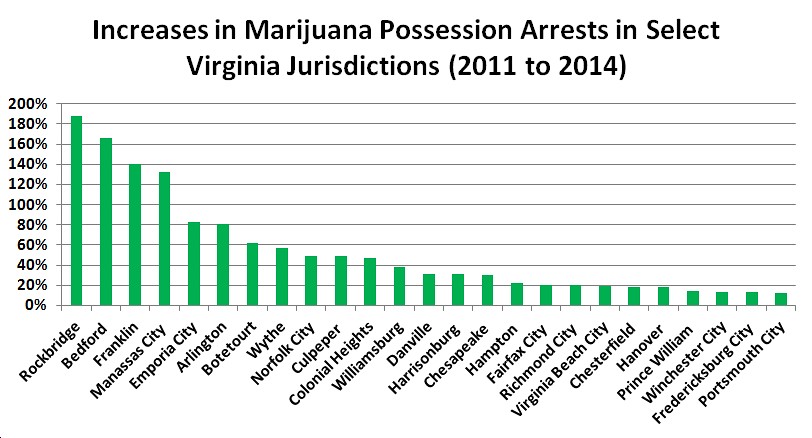 Clearly, the so-called “war on drugs” has been a failure. Worse than that, it’s packed our prisons with non-violent offenders, disproportionate numbers of whom are African Americans, at a heavy human and economic cost to our state. So why do we continue this lunacy, given that it a) doesn’t work; b) is extremely costly; c) is racially disparate to the degree that I think it’s fair to call it blatantly racist? Why don’t our jurisdictions stop their heavy-handed enforcement of these idiotic laws? And why doesn’t Virginia CHANGE these idiotic laws?

On that last question, the answer is clear: Republicans in the Virginia General Assembly. Just look at the vote earlier this year to “pass by indefinitely” Sen. Adam Ebbin’s bill to decriminalize simple marijuana possession. Voting NOT to pass the bill by indefinitely (aka, in support of the bill) were five Democrats: Senators Ebbin, Saslaw, Howell, Edwards, Puller and McEachin. Voting TO pass the bill by indefinitely (aka, kill it!) were nine Republicans: Senators Norment, Obenshain, McDougle, Stuart, Vogel, Stanley, Reeves, Garrett and Chafin.

With regard to why certain jurisdictions, including supposedly “liberal” ones like Arlington County, have such high rates of black/white disparities in terms of marijuana arrests, I’m not sure why exactly that’s  the case, but it certainly would be interesting to know: 1) how many minorities are employed in the Commonwealth Attorney’s offices in the worst jurisdictions in terms of black/white marijuana arrest rate disparities; and 2) how are grand juries selected, and what is the racial composition of those grand juries, in the most racially unequal jurisdictions?

Finally, as to why we continue with this “war on drugs” lunacy, it just boggles my mind. Presumably, there must be “stakeholders” with strong economic self interest in keeping the system the way it is. There’s also the ever-present fear of being labeled “soft on crime,” even though smoking marijuana is no more a “crime” (in fact, it’s arguably MUCH less) in terms of the damage it does than alcohol. Think about it: how many people are killed every year in drunk driving accidents compared to how many people are killed every year in marijuana-related accidents? Uhhhh. As I said, this is crazy. The only question is, how do we convince Republicans to stop bottling up/killing bills like Sen. Ebbin’s in committee?