Yep, extremist bigot Ken Cuccinelli endorsed his fellow extremist bigot — climate science denier, homophobe, etc. – Ted Cruz for President, today in Mechanicsville (video coming soon). Hahahaha. How about Clinton/Kaine vs. Cruz/Cooch in 2016? That would be hilarious…not to mention a landslide for the “blue team.” 🙂

The following press release from American Bridge basically sums up my feelings about Cruz and “the Cooch.”

Ted Cruz continues to rake in endorsements from the ultra-right wing of the Republican party. This time, Ken Cuccinelli — failed GOP nominee for VA governor and supporter of forcing women receiving abortions to have a transvaginal ultrasound — is throwing his support behind Cruz. 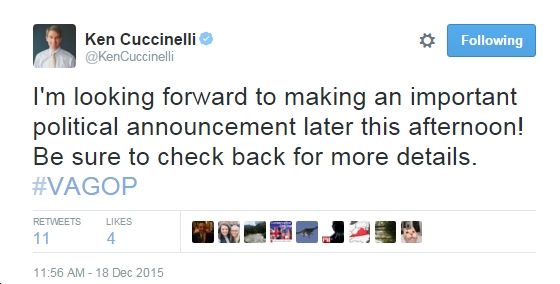 Cruz accepting Cuccinelli’s endorsement is hardly a surprise. On top of agitating for government shutdowns, both are staunch opponents of LGBT rights: Cuccinelli tried to ban sodomy in Virginia but lost his fight with the Supreme Court.

Cruz’s reputation among Senate Republicans was so damaged after the 2013 shutdown that he had to promise he wouldn’t support the Senate Conservatives Fund fight to primary Republicans deemed insufficiently conservative. But now, he’s more than happy to align with SCF to boster his hard-core extreme street cred in Iowa and the south.

More people have voted early in Virginia (nearly half a million) than in any other state. Keep it up! https://bluevirginia.us/2020/10/thursday-news-moderna-ceo-says-its-coronavirus-vaccine-wont-be-ready-until-spring-of-next-year-trump-backs-violent-white-supremacists-theres-no-way-around-it-the-family-is-wo#comment-5092759574