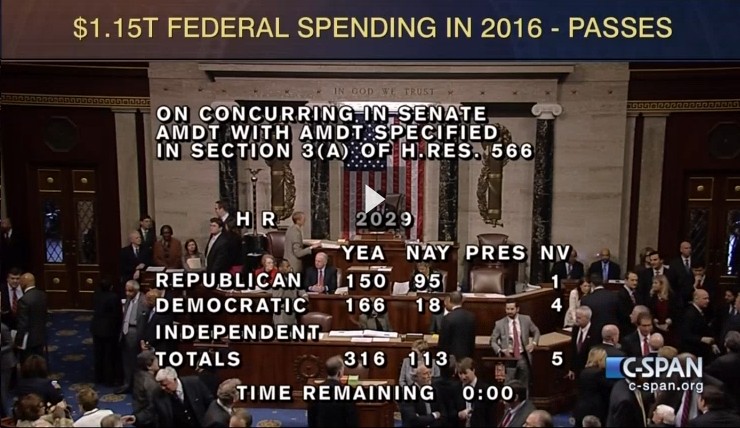 The federal “omnibus” funding bill passed the House overwhelmingly (316-113) this morning. I’m surprised at the margin of victory, particularly the solid majority (150-95) of Republicans for a $1.15 trillion federal spending bill which is actually fairly decent, with great stuff for renewable energy, Metro, federal employees, etc. What on earth was THAT all about? I’m also a bit surprised at the enormous, 166-18, margin of victory among Democrats, as I had been told by a good source to expect maybe 100 Dems voting yes on this…obviously, that number was far exceeded.

How did the Virginia delegation vote? All three Democrats (Representatives Beyer, Connolly and Scott) voted yes, while Republicans were split, with Barbara Comstock and Scott Rigell – both representing “purple” districts – smartly voting “yes,” while hard-red-district and/or hard-right Representatives Robert Hurt, Bob Goodlatte, Morgan Griffith, Dave Brat, Randy Forbes and Rob Wittman all predictably voted “no.” It will be fascinating to see if there’s any political fallout from their right flanks for Comstock and Rigell, as well as for other Republicans who voted for the “omnibus.” I noticed that the usual suspects on the right – Drudge, Breitbart, Limbaugh, etc. – were upset, but unlike when John Boehner was Speaker, Paul Ryan seems to have the magic touch…at least so far. When will Ryan’s “honeymoon” end? Is Ryan simply better at being Speaker than Boehner was? Did Boehner’s “clearing the barn” help ease Ryan’s success in this case? Other factors? What do you think?