As usual, with 2013 Virginia GOP Lt. Governor nominee EW Jackson, he’s not just a raving bigot but also completely full of crap. Turns out that the “scholars” he cites are…well, NOT scholars, but anti-Muslim hate sites and individuals (e.g., Pamela Geller — ” the anti-Muslim movement’s most visible and flamboyant figurehead,” according to the Southern Poverty Law Center). It’s also a myth — no truth to it whatsoever, and certainly no context, such as how many people have been killed over the years by people of other religions or no religion — floating around the fetid fever swamps of the intertubes. By the way, remember that Ted Cruz just recently appeared on Cruz’s weekly “emergency” (cuz EVERYTHING is an “emergency” to loons like him) call; what does that say about Cruz? 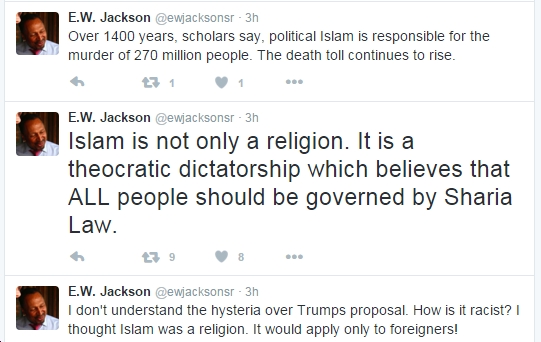