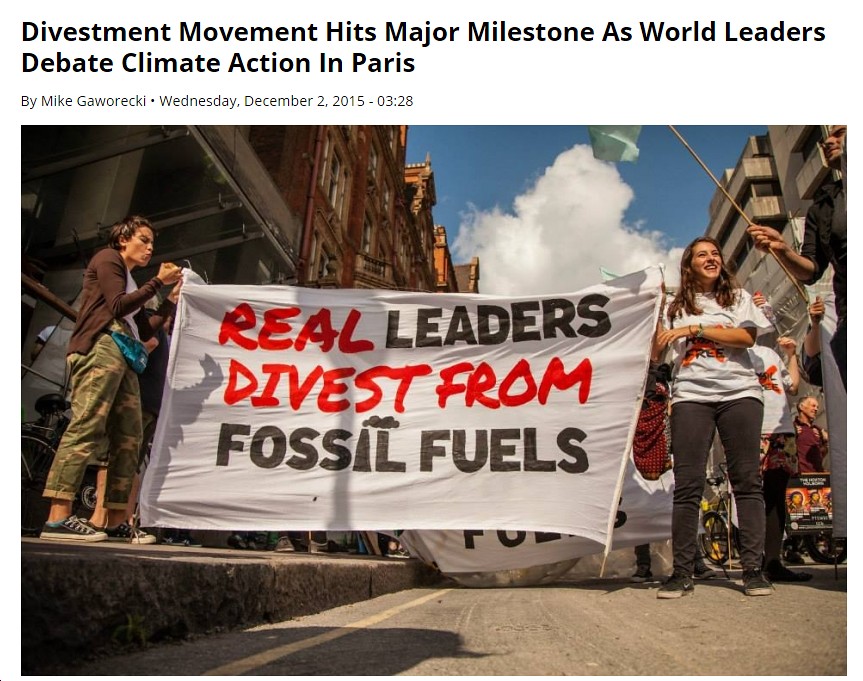 As recently as September 2014, just 181 institutions managing $50 billion in assets had made some sort of divestment commitment.

350.org and Divest-Invest, two of the key groups organizing the divestment movement, announced the new additions to the growing list of divestors this morning in Paris at the UN COP21 climate negotiations.

Some of the 500 institutions that have made commitments plan only to dump parts of their fossil fuel portfolios, the groups note. But the groups say the news nonetheless provides further evidence that investors are increasingly moving their money away from fossil fuels and into clean energy technologies.

“Wednesday’s announcement is another sign in the early days of the Paris Climate Summit that investors are reading the writing on the wall and dramatically shifting capital away from fossil fuels and towards clean, renewable energy,” the groups said in a statement.

So what is Virginia waiting for? As I wrote in September, it’s LOOOONG past time for the Virginia Retirement System (VRS) to divest from fossil fuels. Actually, in some sense it might already be too late, given that “the four largest American coal companies had lost 95 percent of their value over the last four years,” and also that fossil fuel companies like ExxonMobil could be in serious legal and quite possibly financial trouble due to its decades of fraud and deception regarding the severe harm their products do (very much like the tobacco industry denying the link between its product and cancer, emphysema, etc.).

Unfortunately, we’ve seen essentially no leadership on this issue from our state’s elected officials. For instance, last April, Gov. McAuliffe bizarrely said he OPPOSES fossil fuel divestment by the VRS. Even more bizarre was McAuliffe’s “reasoning” (in quotes because I’m using that word very loosely here), that “as governor I am not going to sit here and tell the people who manage these funds what to do — not my role…it is not my job to come in and tell our businesses what to do.” Seriously, that’s it? Faced with both the most severe threat humanity has ever faced, plus the greatest business opportunity in human history (the transition from dirty to clean energy), Gov. McAuliffe’s response is “not my job?” Utterly unacceptable, and it needs to change, ASAP. It also would be great to see AG Mark Herring joining NY’s AG in investigating Exxon (which has had a major corporate presence in Virginia, so Herring should certainly have “standing”) under RICO and other relevant state laws. With the planet careening towards diaster, what the hell are we waiting for?