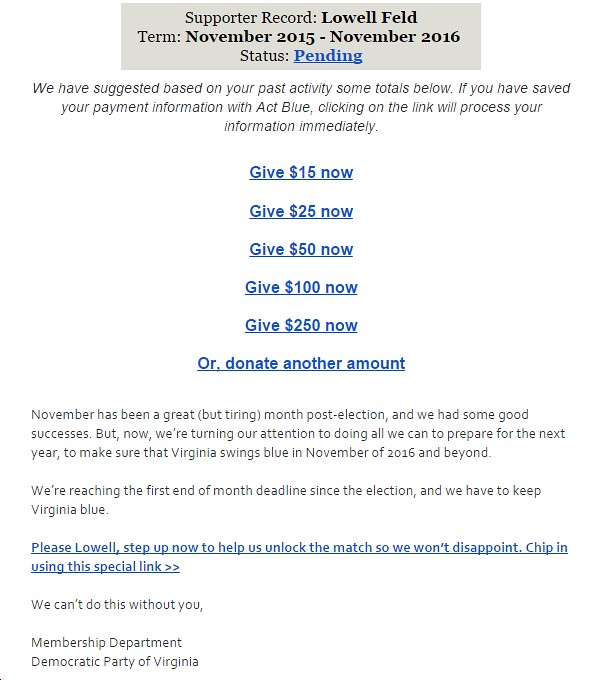 Everyone knows by now that little guys, like most of us, are small fish. Big donors pretty much flood the donation pool and swamp democracy. Still, Democratic groups have outdone themselves trying to go after the crumbs from the “mere mortals,” like you and me. For all they put us through via our inbox and incessant phone calls, you would think we really mattered. But we don’t and we all know it. Well, most of us know it. The attack on the little guy consists of several shakedown approaches designed by manipulative campaign finance folks, and executed by their fairly dastardly contractors. They know nothing about real human motivated behavior. If they did, they wouldn’t behave the way they do. But they pretend otherwise. And they engage in deception, hysteria, catastrophizing and even in some instances bullying. Let’s look at some of the low-spots in fundraising.

Fake Claims.
Fake claims are a mainstay of the attack on the mere mortals. This week DPVA, conjured up an email from the supposed “membership department” (note: there is no such thing) which asserted that the recipient Virginian has a “status pending,” presumably because s/he hasn’t donated yet. As if. Great job turning off donors, btw.

Shaming
In recent years, the political fundraisers and mass mail merchants have upped the ante and employed extreme shaming. The North Carolina Democratic Party (NCDP) sent out their controversial shaming letters to voters they claimed hadn’t voted regularly. I even got one. Me, who has never missed an election. The boneheads are idiots. Not only do they not know how to motivate anyone, but also they do not know anything. Until several years ago, I lived in Virginia. Of course I didn’t vote here in NC prior to my actually living here. Duh!

I also get abundant shaming letters for not donating, or not donating enough. Again, do they really think this is the way to behave? I have heard from voters who will never donate to Democrats again because of this stuff. But the shamers march on. Though I will always give to Democrats, and only Democrats (except, perhaps to Bernie Sanders), I personally will never give to the NCDP or the DNC because of this stuff (see below for the DNC part of this story).

Shaking People Down
This week, I have received two emails almost demanding I reply. A couple new progressive groups, including Progressive Turnout and End Citizens United, however well-intended, are particularly aggressive. Also this past week, the DCCC sent out an email purportedly from President Obama. This is after I have tried and tried to unsubscribe. But that organization simply won’t stop. Its newest beauty purports to be from President Obama, but of course you and I both know that’s a lie. “I emailed you earlier this week,” it begins. The email continues: “But I’m emailing you again because this can’t wait. I need your help.” Yeh, sure. They need to stop impersonating the President.

In 2009, DNC phone calls were the worst. During the ACA fight, an unhinged telemarketer yelled at me several times. I said no, I would not donate. I supported single payer, not the ACA. And I never give in response to a phone call. The caller yelled three times “your president needs you.” I said, “I support the President, but I won’t donate. How dare you call me and shout at me this way. Don’t ever call me again.” It should go without saying that this approach to telemarketing should never happen. 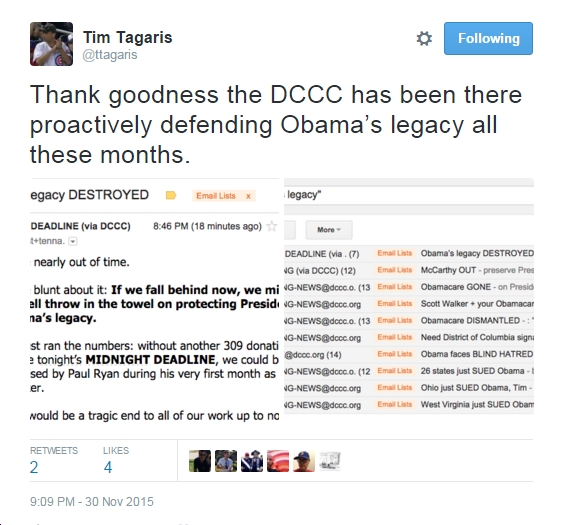 Chicken Little Subject Lines
In the past two years or so, hysterical sky-is-falling emails are common. Many of you probably received the “All is lost” subject line from DCCC about a year ago. And who hasn’t gotten a “last chance” email. We all get the emails with some variation of “OMG, my opponent just got a bucket load of cash!” And just yesterday, I got emails with “awful news…” and “Voting Rights Ended” in the subject lines. Also yesterday, I got an email purportedly from a candidate for Congress in Iowa. Can you believe it? She actually had “MAYDAY” in the subject line. If she is sinking in November, why would anyone send her money now? I also got a “now or never,” as if my money wouldn’t be as good on Nov 1st as it is right before the so-called monthly “deadline.” You gotta develop a strong stomach to receive Democratic emails over breakfast.

Phony Deadlines
All of this brings us to a question: Does anyone actually believe there is a deadline for donations at the end of each month? How dumb do they think we are? What happens at the end of the month is that the candidate has a reporting deadline. Donors have no deadline whatsoever. None. And I don’t care how good it will look for one candidate or another’s bragging rights.

Now I am not telling readers what to do with their donations. Speaking personally though, I never respond to a political email asking for money. You shouldn’t click on an email link anyway. Just don’t. If you wish to donate, don’t do it under duress. Go directly to the candidate’s website or Act Blue. There are benefits to the candidate of the former, of course. But I also like Act Blue.

I budget my donations and discuss them with my husband. We decide where or to whom they will go. Giving (of all types) should be an integral part of the household budget decisions. Of course, if you have a partner with whom you disagree politically, you have an added element to work out. In general I would rather give to candidates directly than let the DCCC, or any other group, choose for me. Time and again that organization has blown off my state. I want a fifty-state strategy and we (you and I) can make that happen by keeping our money mostly within our respective states. Being able to localize my donations is important to me.

It’s true that the state organizations in Virginia and NC need to change, but the need for funding is real. I leave it to you what to do about that. Unless, that is, the mass marketing and fundraising consultants get a grip. Otherwise, they are ruining campaigns for everyone.