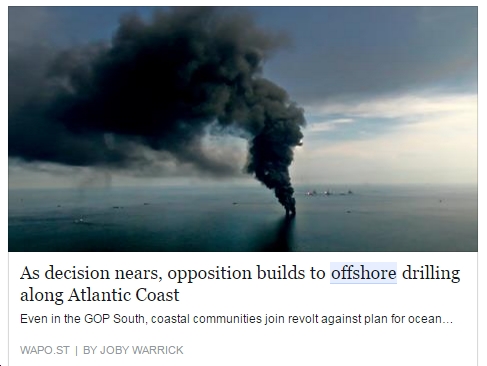 I was very happy this morning to read As decision nears, opposition builds to offshore drilling along Atlantic Coast by Joby Warrick in the Washington Post.

The Virginia Beach council’s reversal is the latest blow to a plan that could bring offshore drilling to the Southeast Atlantic coast as early as 2017.

In recent months, at least 93 coastal communities — from small beach towns on the Delmarva Peninsula to the wealthy and politically powerful cities of Charleston and Myrtle Beach in South Carolina and Savannah, Ga. — have joined a revolt against a pro-drilling movement that once seemed unstoppable in the Republican-dominated South.

The Obama administration is expected to finalize by early spring a plan that could allow limited oil and gas development off the coasts of four Southeastern states — Virginia, North and South Carolina, and Georgia. All four have heavily supported drilling in the past. But lately, resistance to the plan appears to be growing, particularly in coastal towns where politicians and business leaders are expressing doubts about whether oil and gas can deliver the economic benefits the industry’s backers claim.

The growing opposition is, of course, 100% correct: as a recent report found that the supposed benefits of offshore oil drilling off the Atlantic Coast (including here in Virginia) have been wildly OVERstated, while the potential damages to a thriving coastal economy have been wildly UNDERstated. If that’s not enough reason for Virginia leaders – Senators Kaine and Warner, Governor McAuliffe, etc. – to oppose the crazy idea of oil drilling off Virginia’s beautiful, fragile coast, here’s another reason: offshore oil drilling makes less sense than ever strictly from both economic and broader environmental points of view. Why?

1. Oil prices have collapsed and show no signs of recovering anytime soon. At the same time, offshore oil drilling remains expensive. Combine those two factors, and the economics of this proposition – especially given that it’s not even clear that there are large, recoverable oil reserves off the Atlantic Coast – are highly dubious at best. (No wonder the offshore rig count in the U.S. is down nearly 60% from last year at this same time)
2. If it’s not clear yet, given record warm months coming fast and furious, glaciers melting, bizarre/extreme weather becoming more frequent and damaging, seas rising (and acidifying; an even more pressing concern), etc,, etc. – that we need to get OFF of fossil fuels and switch to clean energy as rapidly as possible, you’d think that the Paris climate summit would have focused everyone’s minds on that subject. Given all THE LAST THING we want to do is to lock in new fossil fuel infrastructure, let alone the worst of the worst — coal mining, tar sands, offshore oil drilling. It’s beyond stupid, trending into reckless.

So, why are we even still talking about this? Very simple: the political power of the oil industry and their paid “think tanks,” media flacks and dutiful (to the oil industry) politicians. The question is whether Democrats like Governor McAuliffe and Senators Kaine and Warner will continue supporting an industry whose days are numbered, which is under investigation for potentially being the tobacco industry of the 21st century, and which needs to be quickly replaced by energy efficiency, solar, wind, and other forms of clean, renewable energy? Will our leaders choose to be on the right side of history, or will historians look back and shake their heads at their failure to lead? Let’s hope the former, but let’s not take any chances: call them and let them know where you want to them to be on this issue. Your planet, and more locally your coastal communities, thank you!