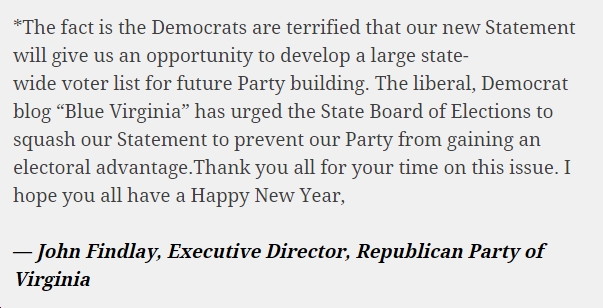 The following, from RPV Executive Director John Findlay, is simultaneously hilarious and pathetic. In short, what’s happening is that Findlay and his colleagues at the Virginia GOP – John “anti Semitic ‘joke’ dude” Whitbeck, etc. – have been getting their heads handed to them in recent days by conservatives, Tea Party activists, Donald Trump, Trump supporters, etc. for requiring a Republican “loyalty oath” for 2016 Virginia presidential Republican primary voters. And, instead of backing down, they apparently are doubling down on their losing argument.

As part of that “doubling down,” they also are trying to deflect attention/blame for their problems to “the liberal, Democrat blog, ‘Blue Virginia.'” Yes, that’s us!  The only problem is that it’s not true. As a bleeds-Democratric-blue guy, as well as the founder and editor of Blue Virginia, let me state this as clearly as possible: I would LOVE LOVE LOVE LOVE LOVE it if Virginia Republicans keep their “loyalty oath,” thereby royally pissing off conservative activists, Tea Partiers, Trump, Trump supporters, etc.; dividing their party; creating massive dissension and anger in their own ranks; etc. I mean, hey, that works for me, ya know? 🙂 So please, Virginia GOP, keep doing what you’re doing; as a Democrat, I’m happy to stock up on popcorn, sit back, relax and enjoy the fireworks the next few weeks. LOL

UVA Weekly #COVID19 model report: "Vaccination rates are the driving factor behind the wide regional variation. Estimates for vaccine acceptance rates vary from a low of 41% in the Eastern Region to 87% in the Northern Region." https://bluevirginia.us/2021/05/friday-5-7-virginia-data-on-covid-19-lowest-10-day-new-covid-cases-since-10-9-20-positivity-rate-at-4-4#comment-5374215338

Summary of the polling in the VA GOP gubernatorial race so far. The unassembled convention is *tomorrow*, starting at 9 am. https://bluevirginia.us/2021/05/new-poll-of-va-gop-primary-voters-amanda-chase-22-glenn-youngkin-21-pete-snyder-16-kirk-cox-7-61-of-amanda-chases-voters-believe-the-convention-will-be-rigged