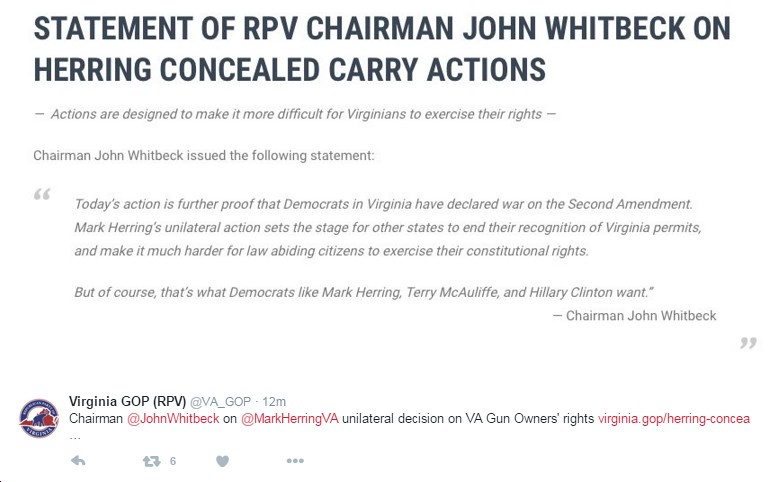 The statement by Republican Party of Virginia Chair John “Anti-Semitic ‘Joke’ Dude” Whitbeck (see image; click to “embiggen”) to Virginia Attorney General’s actions today on “concealed carry” “reciprocity” with other states is, not surprisingly, 100% absurd. It’s hard to know where to even start, but let’s just list two huge, gaping problems with Whitbeck’s “argument” (so to speak).

1. The Second Amendment does not allow for anyone to carry any weapon, anywhere, under any circumstances — even under the current, right-wing Supreme Court. As this summary of the Heller decision by Cornell University Law School explains:

Like most rights, the Second Amendment right is not unlimited. It is not a right to keep and carry any weapon whatsoever in any manner whatsoever and for whatever purpose: For example, concealed weapons prohibitions have been upheld under the Amendment or state analogues. The Court’s opinion should not be taken to cast doubt on longstanding prohibitions on the possession of firearms by felons and the mentally ill, or laws forbidding the carrying of firearms in sensitive places such as schools and government buildings, or laws imposing conditions and qualifications on the commercial sale of arms. Miller’s holding that the sorts of weapons protected are those “in common use at the time” finds support in the historical tradition of prohibiting the carrying of dangerous and unusual weapons. Pp. 54–56.

2. What Attorney General Herring announced to day was simply to ensure that other states’ “standards for issuance of a concealed handgun permit or for recognition of such permits” meet Virginia’s standards. For instance, Virginia disqualifies people from carrying concealed firearms if: they a) “been adjudicated legally incompetent, mentally incapacitated, or not guilty by reason of insanity;” b) are “subject to a restraining order, or to a protective order;” c) have “been convicted of stalking or has pending stalking charges;” d) have “been convicted of any assault, assault and battery, sexual battery, discharging of a firearm or brandishing of a firearm within the three-year period immediately preceding the application, or has pending charges for any of the above;” e) have “been convicted of a felony or has felony charges pending;” f) have “been convicted of two or more misdemeanors within the five-year period immediately preceding the application;” g) are “addicted to, or is an unlawful user or distributor of, marijuana, synthetic cannabinoids, or any controlled substance;” h) are an “alien other than an alien lawfully admitted for permanent residence”; i) are an “individual who is a fugitive from justice;” j) are an “individual who has been discharged from the armed forces of the United States under dishonorable conditions.”

So, seriously, the Chair of the Virginia GOP really wants to override Virginia law and permit people who are mentally incompetent, subject to restraining orders, convicted of stalking, felons, drug addicts and dealers, people they refer to as “illegal aliens,” etc. to carry a concealed firearm? Why? What constructive public policy purpose would that serve?

Unless, of course, Whitbeck et al don’t care about serving constructive policy purposes, but instead are simply doing whatever the NRA and other gun absolutists tell them to do. Either way, the only ones waging any kind of “war” are Whitbeck and his allies, who are busy doing just that to the citizens of Virginia with regard to the ongoing scourge of gun violence in this country. It would be one thing if Whitbeck et al supported ANY reasonable, commonsense gun control measures, even ones supported by 80%, 90% of Virginians. But they don’t, which basically tells you everything you need to know…