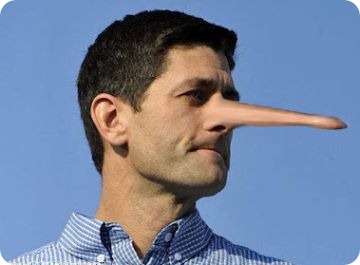 In 2012, I took to calling Paul Ryan “Lyin’ Ryan,” because almost every time he opened his mouth, what came out was usually false or distorted in one way or the other. Today, Lyin’ Ryan – clearly feeling heat from his right for the “Omnibus” bill – is back in a big way, with this desperate, pathetic, flailing claim.

Speaking Tuesday evening with conservative talk show host Hugh Hewitt, he listed oil exports as one of the top victories during his short time leading the House so far, and compared exports’ impact on oil markets to the controversial pipeline that President Obama blocked last month.

“We think we got good victories for the energy markets. Having the oil export ban lifted permanently, it’s like having 100 Keystone pipelines,” Ryan said.

How far off is Lyin’ Ryan from the truth on this one?  First off, keep in mind that the Keystone pipeline would have had capacity of 830,000 barrels per day, so 100 of those would equate to 83 MILLION barrels per day (to put that in perspective, it’s just a bit lower than total world oil production in 2015 of 95 million barrels per day).

Second, how much more U.S. oil production will the lifting of the crude oil export ban lead to? The U.S. Energy Information Administration (EIA) modeled this, and in their “reference case,” they found that in 2025, the difference in U.S. oil production with or without the crude oil export ban in place was…wait for it…yep, ZERO! In short, Lyin’ Ryan was infinitely far off in his crazy “100 Keystone pipelines” comparison, unless you think that ZERO is greater than 83 MILLION barrels per day! LOL

So, other than being utterly ignorant, what’s going on here? Clearly, “Lyin’ Ryan” is feeling heat from his far right (and yes, it’s scary to think that there are people ever further right than Ayn Rand-worshipping Ryan) and is flailing around, trying desperately to show his “base” that he accomplished something in the “Omnibus.” Thus, his wild exaggerations about lifting the crude oil export ban. #FAIL