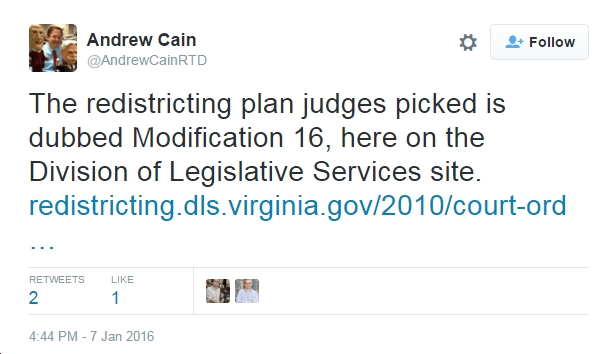 Bottom line, as Richmond Times-Dispatch reporter Andrew Cain reports: “A three-judge panel in Richmond has imposed a new Virginia congressional map that seeks to give blacks a chance to elect candidates of their choice in two districts, not just one. The map – one of two proposed by the judges’ expert – lowers the black voting age population in the 3rd District, represented by Rep. Robert C. ‘Bobby’ Scott, a Democrat, from 56.3 percent to 45.3 percent. It raises the black voting age population in the 4th District, represented by Rep. J. Randy Forbes, a Republican, from 31.3 percent to 40.9 percent.” See here for the three-judge panel’s ruling. 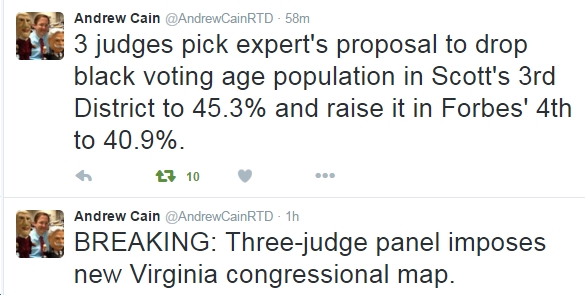 Of course, the U.S. Supreme Court could issue a stay, but seems like this plan is the most likely outcome in the end. Which means, potentially, that State Sen. Donald McEachin (D) will run for Congress in the 4th CD (not sure he’d be opposed in a Democratic primary, now that we’re sure Levar Stoney is running for Mayor and not Congress), also that current Rep. Randy Forbes (R) could run statewide in 2017 or 2018  — or even take on Rep. Dave Brat (R) in the 7th CD (two right-wing extremists running against each other? fun times!). Finally, I’m hearing that this map makes the 2nd CD a bit more Republican, which I’m sure has Rep. Scott Rigell (R) smiling. Not sure we could have beaten Rigell anyway…sigh.