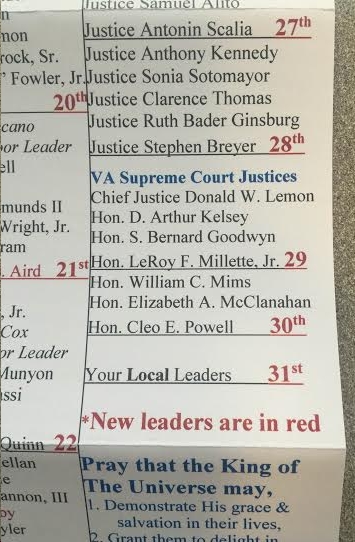 When the Virginia General Assembly convenes next week for its 2016 session, the Republican majority of course plans to take up the most important, pressing issues facing Virginians — expanding health care, protecting the environment, helping to create good-paying jobs, ensuring that every Virginian has a chance to succeed in life, etc.

Oh wait, who am I fooling, of course that’s not what they’ll be focusing their time and energy on. Instead, they’ll undoubtedly be looking at ways to screw over working people, the environment, people without access to affordable health care, etc., while rewarding big corporations and other monied interests. They’ll also be busy pursuing grudges against Gov. McAuliffe, whether on his administration’s plan for congestion pricing on I-66, or on Virginia Supreme Court Justice Jane Roush.

With regard to Roush, see the Washington Post article from August 2015, which reports, “Virginia Republicans say they will reject Gov. Terry McAuliffe’s pick for the state’s newest Supreme Court justice and install their own choice — an unprecedented move in modern Virginia history.” And why are Republicans doing this? Mostly because, as Jeff Schapiro wrote in November 2015, “because [they] can…sticking it to McAuliffe, sheathing 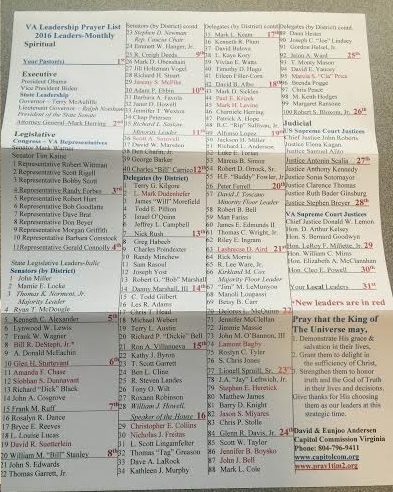 that delight in what passes for cynicism and providing another reminder that the governor, chastened in the General Assembly elections, has little or no pulling power in Virginia, a presidential battleground state he vows to deliver for Hillary Clinton next year.” This, despite the fact that Roush is currently on the Virginia Supreme Court, is by all accounts a superbly qualified Justice, and had strong bipartisan support…until Republicans decided to take a spiteful shot at Gov. McAuliffe.

By the way, Roush isn’t off the Supreme Court yet, as Republicans actually have to vote for their replacement, but based on the “Virginia Leadership Prayer List,” sent around today by Virginia House Majority Leader Kirk Cox (R), it looks like they’ve already forgotten about her. Note the photo above of the “Prayer List,” focused on the Virginia Supreme Court section, and the glaring absence of…yep, Justice Roush? Classy.

By the way, I’m not quite sure why it’s cool for the Virginia House Majority Leader, in his offical capacity, to be sending around (in a list by the Capitol Commission Bible Study, sent around on official letterhead from Majority Leader Cox, I’m told) an explicitly Christian prayer (“Grant them to delight in the sufficiency of Christ”), despite the fact that there are numerous non-Christians in the Virginia General Assembly. As a fun thought exercise, just imagine if the House Majority Leader were Muslim and sent around a prayer “to delight in the sufficiency of Allah” or “in the blessings of Muhammed” or whatever? Can you imagine the hysteria from Cox et al? Anyway, that’s another discussion for another time. For now, I just find it fascinating that Republicans aren’t even waiting until Justice Roush is officially booted off the Virginia Supreme Court to withhold their prayers for her.

P.S. It should be Chief Justice Donald W. Lemons not “Lemon.”