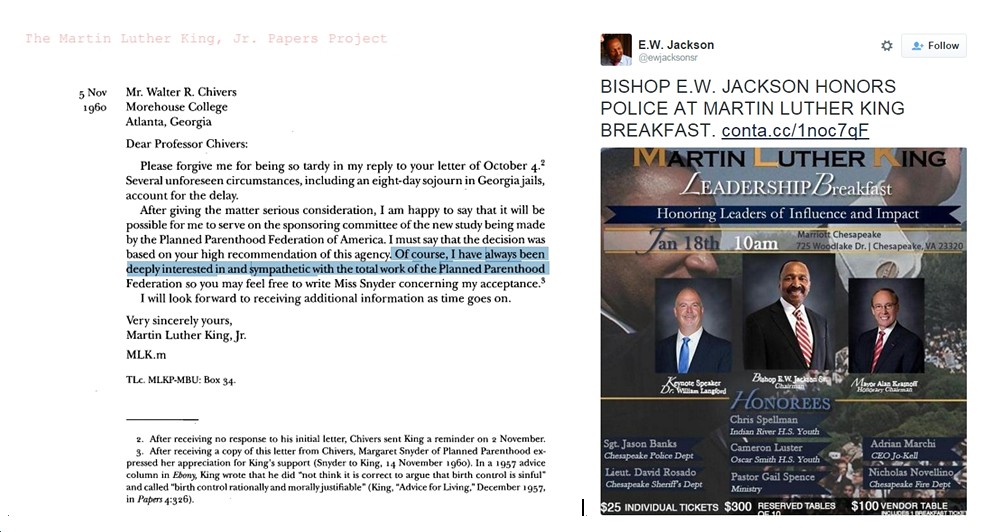 EW Jackson, the 2013 Virginia GOP nominee for Lt. Governor of Virginia — and a prominent Ted Cruz endorser this year — is infamous for being one of the most (far-right) extreme political figures in America. Among those Jackson hates the most include: progressives, liberals, Democrats, Barack Obama and the Black Lives Matter movement. And, of course, Jackson utterly LOATHES Planned Parenthood with a burning passion. Among other things, Jackson has claimed that Planned Parenthood is a racist organization, “ripping apart and selling” black babies “on the auction block.”

All of which is why it’s so fascinating to see Jackson holding a breakfast Monday honoring Martin Luther King, Jr. , one of the greatest men in U.S. history (and really in all of world history), one of its greatest progressives, and – yes – a strong supporter of Planned Parenthood.

In 1960, King agreed to be on a committee for a Planned Parenthood study on contraception, explaining in a letter, “I have always been deeply interested in and sympathetic with the total work of the Planned Parenthood Federation.”

…In 1966, when the Planned Parenthood Federation of America inaugurated the PPFA Margaret Sanger Award, its first awardee was Martin Luther King. Coretta Scott King accepted the award for her husband, delivering the speech he’d written for the occasion. Titled “Family Planning – A Special and Urgent Concern,” it lamented the lack of investment in family planning…”Family planning, to relate population to world resources, is possible, practical and necessary. Unlike plagues of the dark ages or contemporary diseases we do not yet understand, the modern plague of overpopulation is soluble by means we have discovered and with resources we possess.”

King also heaped praise on Planned Parenthood founder Margaret Sanger, the same woman who Jackson has called a “white supremacist,” and that “to honor her ‘is to be complicit in her evil and her racism.’” Alrighty…so here’s what Martin Luther King, Jr., who Jackson is honoring on Monday, had to say about Sanger.


There is a striking kinship between our [Civil Rights] movement and Margaret Sanger’s early efforts. She, like we, saw the horrifying conditions of ghetto life. Like we, she knew that all of society is poisoned by cancerous slums. Like we, she was a direct actionist – a nonviolent resister. She was willing to accept scorn and abuse until the truth she saw was revealed to the millions. At the turn of the century she went into the slums and set up a birth control clinic, and for this deed she went to jail because she was violating an unjust law. Yet the years have justified her actions. She launched a movement which is obeying a higher law to preserve human life under humane conditions. Margaret Sanger had to commit what was then called a crime in order to enrich humanity, and today we honor her courage and vision; for without them there would have been no beginning. Our sure beginning in the struggle for equality by nonviolent direct action may not have been so resolute without the tradition established by Margaret Sanger and people like her. Negroes have no mere academic nor ordinary interest in family planning. They have a special and urgent concern.

I’m not sure how E.W. Jackson reconciles his crazy beliefs about Planned Parenthood and Margaret Sanger with Martin Luther King, Jr.’s strong support and praise for both the organization and its founder. It’s possible that Jackson is utterly clueless, or that he knows exactly what he’s doing but simply doesn’t care if he massively contradicts himself. Of course, he’s also contradicting his hatred for progressives and liberals, and his support for extremist right wingers like Ted Cruz, by honoring Martin Luther King, Jr., given that King left one of the greatest progressive legacies in U.S. history.  Again, perhaps Jackson is simply clueless…or crazy…or a shameless grifter looking for a way to make some $$$. Regardless, it’s very telling that  Fox “News” has this guy on their network, that Virginia Republicans nominated him for Lt. Governor in 2013, and that Ted Cruz is proud to have his endorsement.