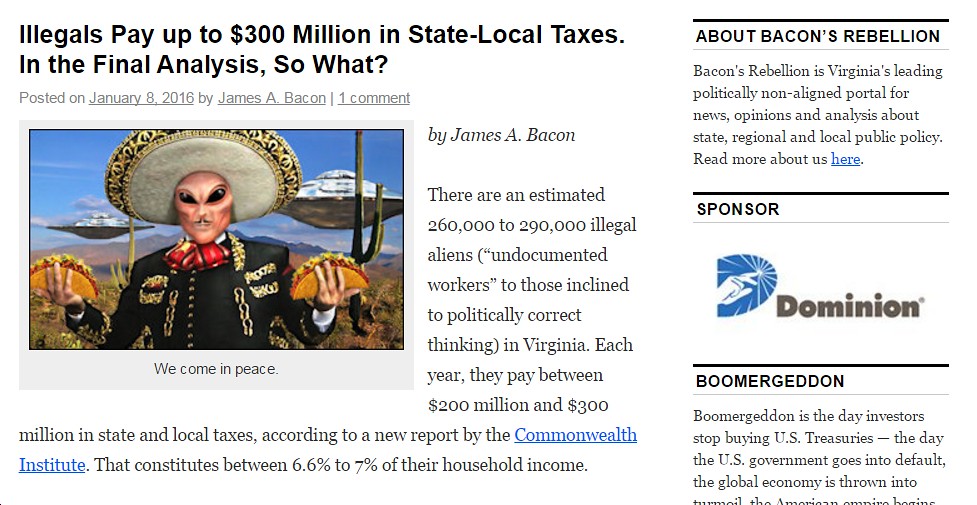 If there is anything constant about the extant GOP, it’s that things heretofore never considered acceptable, appropriate or decent are now a daily occurrence. Should a Republican win the general, none of the GOP candidates, especially presumed front-runner Donald Trump, would be capable of governing all of America’s people according to the Constitution and actually-settled law. Of course, they don’t intend to. The blatant racism, sexism and general misanthropy is so pervasive.

Now there is a Virginia political blog, Bacon’s Rebellion, trying to counter an immigration paper it doesn’t like in the most xenophobic way, portraying those of Hispanic descent as a caricature — a cross between a nasty cultural stereotype and a space alien. It’s not “Bacon’s Rebellion,” but the rebellion of the fourth-grade bullies with fourth-grade language skills and fourth-grade self control. Dominion Power, what are you thinking sponsoring this garbage?

But more to the point, what is becoming of a party which I once supported, before it stumbled into John Bircherism, Reaganomics (“voodoo economics”), and the infamous/race-baiting “Southern Strategy.” By 1968, I knew better than to trust a party which already back then had lost its way. But today, even Ronald Reagan would roll over in his grave, confronted with what the former “Party of Lincoln” has become. And people of goodwill everywhere must be shaking their heads in disgust at what has become of a once-respectable political party.

The world faced such a time before; another buffoon in another time and place belittled others, exhorted crowds to rise up against specific minorities. The GOP can continue down this path to its own, all of America’s (and the world’s) detriment. Or it can finally stand up to this hatred spewing from its own ranks and once and for all say, stop! In the name of decency, in the name of all that is in the best sense American and positively human, stop!

It is not “political correctness” to respect people regardless of their race, ethnicity, gender, or whom they love. To the contrary, it is acting like the Christians the whole sorry cast of winger candidates pretends to be. It is not “political correctness” for Americans to work from their better natures; it is simply the right thing to do, the American thing to do. And the ugliness taking over a sizable minority of this country is not. Let it not become so. What the wingers call “political correctness,” as if treating others the way we would like to be treated ourselves is a bad thing, is just politeness and courtesy. It’s what’s needed for civil society to function. But in today’s GOP, that apparently is asking too much.