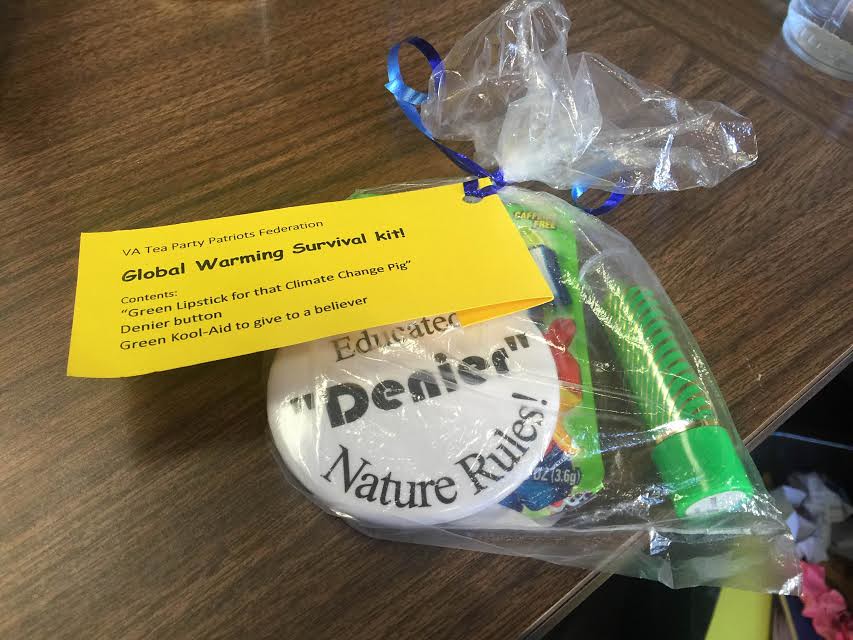 As the global climate crisis spirals out of control, the Virginia Tea Party Federation is busy…no, not advocating free market solutions to the crisis, but mocking and denying that there even IS a crisis. Check out the “Global Warming Surival Kit” these delusional fossil fuel industry puppets were handing out yesterday in the Virginia General Assembly.

New data from NASA and the National Oceanic and Atmospheric Administration suggest that January of 2016 was, for the globe, a truly extraordinary month. Coming off the hottest year ever recorded (2015), January saw the greatest departure from average of any month on record, according to data provided by NASA.

But as you can see in the NASA figure above, the record breaking heat wasn’t uniformly distributed — it was particularly pronounced at the top of the world, showing temperature anomalies above 4 degrees Celsius (7.2 degrees Fahrenheit) higher than the 1951 to 1980 average in this region.

Indeed, NASA provides a “zonal mean” version of the temperature map above, which shows how the temperature departures from average change based on one’s latitude location on the Earth. As you can see, things get especially warm, relative to what the Earth is used to, as you enter the very high latitudes…

In other words, the planet is facing a dire situation, one caused by human combustion of fossil fuels, plus deforestation, agricultural practices (excessive meat consumption is VERY high on the list), etc. Yet the Tea Partiers and their ilk, instead of pushing for clean, increasingly inexpensive energy solutions like rooftop solar power, or market-based ways (e.g., a revenue-neutral carbon tax) to address this problem, are running around handing out Kool-Aid and mocking the overwhelming science behind the human-caused climate crisis. It would be funny if it weren’t so serious.