I like these trends, courtesy of PredictWise prediction market…Hillary Clinton with a 70% chance (and rising) of becoming president, while Donald Trump has only a 20% chance (and dropping), according to people putting their money where their mouths are. Also note that nobody else – Ted Cruz, John Kasich, Marco Rubio or Bernie Sanders – has more than a 3% chance of becoming president in 2016. Of course, prediction markets aren’t necessarily correct, but in this case I think it’s hard to argue with what they’re saying about the general election, particularly with Michael Bloomberg announcing he isn’t running. (Note: the Iowa Electronic Markets currently have it as Dems with a 68.5% chance of winning in November)

Also note that PredictWise currently has the likely GOP nominee as Donald Trump (66% chance), followed by Ted Cruz (17% chance), John Kasich (9%) and Marco Rubio (7%). On the Democratic side, it’s Hillary Clinton with a 96% chance of becoming the Democratic nominee, with Bernie Sanders at 4%. Those also seems about right to me. What do you think? By the way, there are WILDLY differering national polls out this morning: either Hillary Clinton is pulling away big time (NBC/Survey Monkey poll) or the race is tightening sharply (Washington Post/ABC News poll). Take your pick! LOL 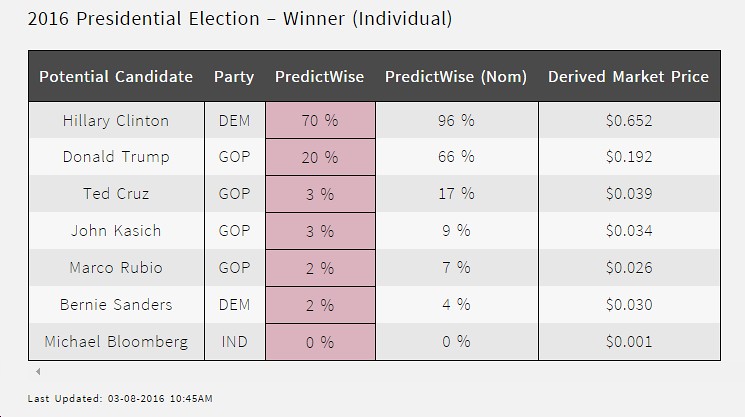