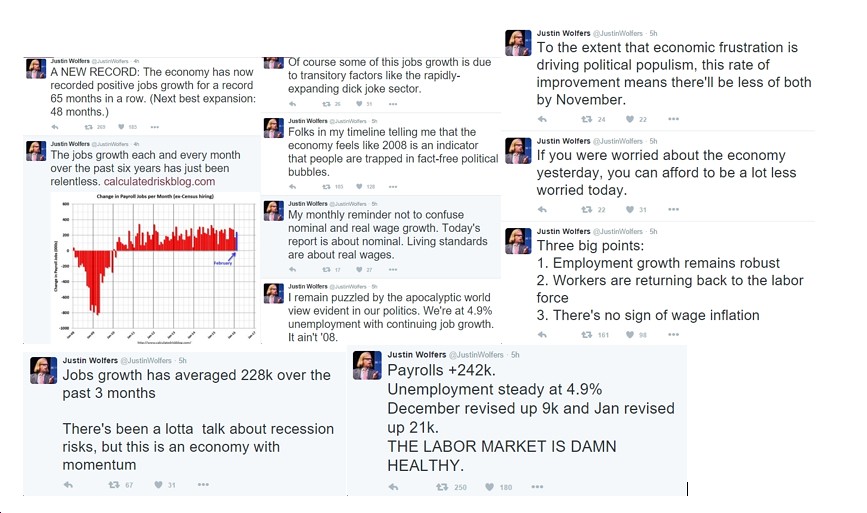 I saw the following tweets from University of Michigan Economics Professor Justin Wolfers this morning, following the strong jobs numbers for February (following many, many months of strong jobs growth), and they really spoke to me. Let’s start with the fact that “jobs growth each and every month over the past six years has just been relentless.” And more to the point: “I remain puzzled by the apocalyptic world view evident in our politics. We’re at 4.9% unemployment with continuing job growth. It ain’t ’08.”

So what’s going on here? I mean, at this point, after friggin’ 65 straight months of positive job growth and a decline in the unemployment rate to 4.9%, how can the Republicans trot out there day after day claiming that our country’s a disaster, we “don’t win anymore,” blah blah blah? I mean, at least Bernie Sanders has a serious point about income inequality, which is the one major weak spot in our economy, and that’s largely due to Republicans making our tax code far less progressive since Ronald Reagan, plus forces like globalization suppressing U.S. wage growth. But Republicans make no sense at all, and the fact that anyone – the media in particular – takes them in any way seriously is just wildly irresponsible. Even worse, Republicans’ economic track record is utterly abysmal, and their economic policy proposals would make things much WORSE, not better. So where on earth is all this “sky is falling, we’re all dooooomed!” blather coming from, and why does anyone believe it?

P.S. On the other hand, Gallup just reported that President Obama’s job approval rating is at 51%-44% (+7 points), its highest level in months. Perhaps people are FINALLY starting to give Obama credit for succeeding economically, despite Republicans doing everything they could to make him (and the country) “fail?”