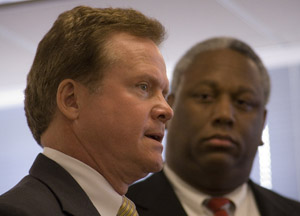 I’ve already commented on Jim Webb’s disgraceful comments about the coarse, racist, demagogue and neo-fascist, Donald Trump, on “Morning Joe” earlier today. Now, one of Jim Webb’s first and most important endorsers back in 2006 — then Delegate (and now State Senator) Donald McEachin, has issued a scathing statement repudiating Webb. This expresses my feelings, and the feelings of many other 2006 Webb “ragtag army” members, very well I’d guess.

Henrico- Senator A. Donald McEachin (D-Henrico) today issued this statement in response to Jim Webb’s comments about Hillary Clinton and Donald Trump. Senator McEachin said, ”I considered Jim Webb a political friend and ally but anyone who can rationalize Trump’s racist, xenophobic and misogynistic attitudes, his absurd coarsening of the dialogue and demeaning of the presidency and the process is someone I feel compelled to repudiate,” Senator McEachin said.

Note that the endorsement in 2006 by Donald McEachin was very helpful to Jim Webb in many ways, including pushing back against charges that Webb was racist (because of his apparent admiration of the Confederacy, among other things). Yet now Webb’s seriously thinking about supporting a racist like Donald Trump??? Wow.

Another key, early endorser of Jim Webb in 2006 was former Rep. Leslie Byrne, who accurately called her endorsement of Webb the “liberal woman’s Good Housekeeping Seal of Approval.” Among other things, that endorsement helped Webb counter charges of misogyny and of not being a “real Democrat.” Unfortunately, today, Webb’s proven beyond a shadow of doubt that he’s NOT a real Democrat, and also that he’s perfectly happy to consider supporting a raging misogynist (Trump). Here’s what Leslie Byrne herself had to say on Facebook, following Webb’s appearance on “Morning Joe.” 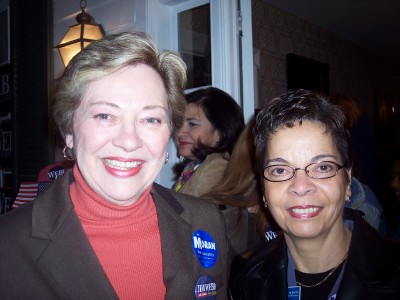 Dear Jim Webb: Right now you couldn’t get elected Dog Catcher in Virginia. You have betrayed all those who worked, including Hillary Clinton, to allow you to eke out a 9,000+ vote victory. Rather than build on that victory, you quit, which you seem to do on a regular basis. I am through with you…[Byrne added in another thread] He seemed to like Hillary enough when she was raising money for his Senate race. What a disloyal dweeb.

Sad to say, as someone who co-founded the Draft James Webb movement and who worked for his 2006 campaign – and who remains very proud of what the “ragtag army” accomplished, booting George Allen from office and taking back the U.S. Senate – I can’t say I disagree with a word either Sen. McEachin or former Rep. Byrne had to say. It’s just sad.