So, basically what Ted Cruz endorser and 2013 Virginia GOP Lt. Governor nominee E.W. Jackson is arguing here is that the future SHOULD belong to “those who slander the Prophet of Islam.” Straight-up, unabashed bigotry; and I guarantee you that no Republicans – Ted Cruz, the Virginia GOP, etc. – will condemn Jackson for this, just as they haven’t condemned him for a million other bigoted things he’s said in the past. By the way, it’s interesting that EW Jackson conveniently omits the rest of what President Obama said in that 2012 speech to the UN, such as Obama’s appeals to not let the future “belong to those who target Coptic Christians in Egypt;” or “to those who bully women;” or “to those corrupt few who steal a country’s resources.” Jackson also omits Obama’s demand that “those who condemn that slander [against the Prophet of Islam] must also condemn the hate we see in the images of Jesus Christ that are desecrated, or churches that are destroyed, or the Holocaust that is denied.” It’s fascinating what this guy’s warped, hate-filled mind focuses on and what it ignores. Again, though, I’m not going to hold my breath waiting for Ted Cruz and other Republicans to disown him… 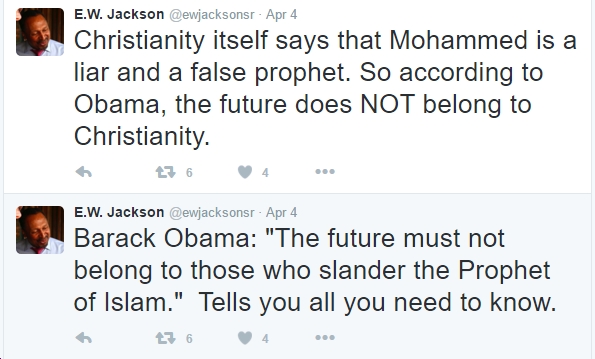