Courtesy of VPAP, this is what happens when Virginia Democrats only vote in presidential and/or “federal-only” election years. In short, when Democratic voters stay home in those odd-year elections we know and love so much here in Virginia — you know, the elections in which we choose our Governor, Lt. Governor, Attorney General and entire state legislature — we basically kill any ability whatsoever to pass good (progressive, pro-environmental, pro-clean-energy, etc.) legislation.

What happened in the 2016 General Assembly session is illustrative: out of 443 bills introduced by House of Delegates Democrats this year, 335 “failed” and 34 were “continued” to 2017, meaning that 83% of House Dems’ bills didn’t even make it out of the House of Delegates, let alone get signed into law. As for the other 17%, rest assured that almost all of those were either noncontroversial, minor, hyper-local, or otherwise not something the Republicans (or powerful corporations like Dominion Power) particularly cared about. Oh, and note WHERE those bills were killed: mostly in committee or subcommittee, and mostly with no recorded vote — in the dark, without sunshine, in other words. As a final kicker, note that Republicans had a great deal more success passing their (frequently nasty, bigoted, anti-environmental, anti-progressive) legislation.

Great “democracy” we’ve got here, huh? Really represents the voters of Virginia? Not! Especially when you consider that Virginia voted twice for Barack Obama, has elected Democrats to 5/5 statewide elected officials, yet suffers under a House of Delegates that is nearly 2:1 Teapublican. Yeah, it sucks, but it’s also Democratic voters own damn fault, as they could solve this problem simply by SHOWING UP TO THE POLLS in non-presidential years! Grrrrr. 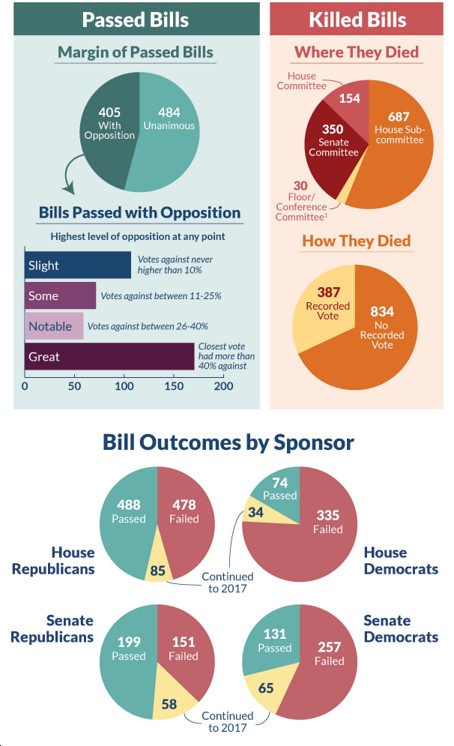