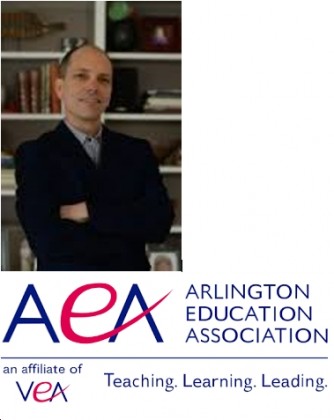 This is a major, impressive endorsement (see below) for Erik Gutshall, particularly given that he’s running against someone (the incumbent Arlington County Board Chair, Libby Garvey) who served on the Arlington County School Board for 15 years!

The fact that the Arlington Education Association would endorse Gutshall over the incumbent in this race is clearly NOT a vote of confidence in the incumbent’s leadership. In stark contrast, it’s a major vote of confidence in Gutshall, who has run an impressive campaign for County Board and stands a good chance of winning the Democratic primary on June 14, barring a massive push by Garvey’s Republican ally John Vihstadt to turn out Republicans for Garvey. Stay tuned…

Arlington, VA — Today, the political arm of the Arlington Education Association, an organization composed of current and former Arlington Public School teachers, endorsed Erik Gutshall for the Arlington County Board. The endorsement comes after both Gutshall and incumbent County Board Chair Libby Garvey vied for the organization’s support through a comprehensive interview process. Once again, respected leaders have responded positively to Gutshall’s call to “turn the page” from the failed leadership of the past that is associated with five-time Arlington School Board Chair Libby Garvey.

Gutshall had the following to say:

“As an APS parent, I understand many parents’ frustration with Libby Garvey’s education record over the past twenty years. In 2011, in an interview on WAMU School Board Chair Libby Garvey said “One of the major things you do not want to do on a school board is to overbuild”. It’s that thinking that led to an inadequate plan for Arlington’s foreseeable school enrollment increases, a plan that has directly contributed to today’s overcrowded classrooms and relocatable trailers. Now as the crisis moves into it’s 6th year, Arlington parents, teachers, and students don’t want silly proposals, like Ms. Garvey’s recent suggestion to have classes run from 5 a.m. to 11 p.m.. Instead Arlingtonians are looking for serious leaders ready to roll up their sleeves, conduct real community engagement and develop long range space and educational solutions to our serious challenges.

I’m proud that Arlington’s teachers’ recognized my commitment to collaboration and respectful community engagement. I’m also honored to be the only candidate to have a sitting school board member endorse their candidacy, further evidence of Libby Garvey’s divisive leadership on the County Board. In fact, it should be noted that not a single sitting County Board or School Board member has endorsed Ms. Garvey.

“It’s incredibly disappointing that, for the first time in recent memory and on Ms. Garvey’s watch as County Board Chair, the County Board effectively did not fully fund the School Board’s budget request. Instead, Ms. Garvey continues to use muddied math to falsely claim that the County Board’s allocation exceeded the School Board’s budget request, though all of her County Board colleagues had publicly concluded that such a claim was misleading and removed the reference from County budget documents (goo.gl/oGyUV3, starting at 3:43.48). Unfortunately, despite this instruction from a majority of the Board, Ms. Garvey continues to tell this false story in letters to constituents and in her public statements of the Board’s actions.

“The truth is, Arlington has some tough decisions ahead if we are to seriously address school capacity issues and rising enrollment. We can only address Arlington’s challenges if we work together with parents and residents in a collaborative and intellectually honest way. I am honored to have the trust of so many community leaders, including Arlington’s teachers, who believe I am the best candidate to realize our full potential. I’ll work hard to make APS even better for my three daughters and for children, parents, and neighbors all across this community.

AEA-PAC President Gerry Collins had the following to say:

“Erik Gutshall approaches decision-making as a consensus-builder, with an eye to transparency and engagement all along the way. We support his view of the schools as both institutions of opportunity for our students as well as assets for community activities and events, and are encouraged by his support for school funding.“

Following Release of Grand Jury Report, Loudoun4All Responds to the Firing of LCPS Superintendent Dr. Scott Ziegler and Calls for the Resignation of Loudoun...