Virginia State Senator Scott Surovell sums up my views on this. I’d just add that for a hard-right, climate-science-denying Republican like George Will to leave that party shows you how far they’ve lurched off the far, far, far-right-wing-extremist deep end. It’s amazing we even have a party like this in the United States, let alone that it’s a major one, but these are truly bizarre, scary, disturbing times we live in.

“The GOP is reaping what it has sown for the last decade plus. Running on divisive social issues, nativism, anti-science, anti-information, saying we can have everything we want for free while marginalizing our newest Americans and attacking our most vulnerable has created unrealistic expectations among many Americans who are now demanding results and appears to be leading to a political divorce in the GOP coalition.” 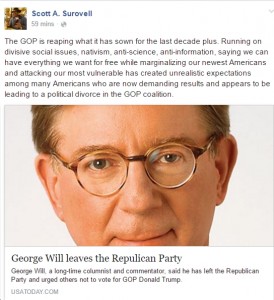 .@RepWexton (D-VA10): "The Women's Health Protection Act that we passed today defends the right to choose and empowers legal challenges against the most restrictive abortion laws in the country, like in Texas and Mississippi." https://bluevirginia.us/2021/09/friday-news-our-constitutional-crisis-is-already-here-the-jan-6-plotters-had-a-mob-political-journalism-needs-a-reset-mitch-is-crashing-america-but-hes-not-nuts-enough-for-trump-maricopa-fake-audit-fi#comment-5547112544