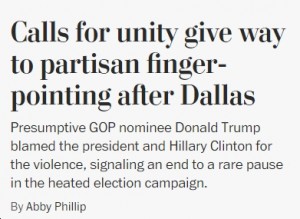 This morning’s Washington Post story epitomizes so much wrong with the corporate media, it’s amazing. A few things that jumped out at me include:

*In general, this is the worst of “both sides-ism” reporting, “false equivalency,” etc. In fact – and again, it’s not opinion, it’s a FACT that the media should be focused on reporting – Democrats have overwhelmingly called for unity, while decrying the killings of both African Americans and police, while Donald Trump et al. (e.g., EW Jackson, Virginia state chair Corey Stewart) have been their usual inflammatory, divisive, racist selves.

So, bottom line: the corporate media is horrible as always, trolling for clicks and “eyeballs,” with apparently no (or at best, very low) standards of journalistic ethics and what constitutes fact-based reporting.