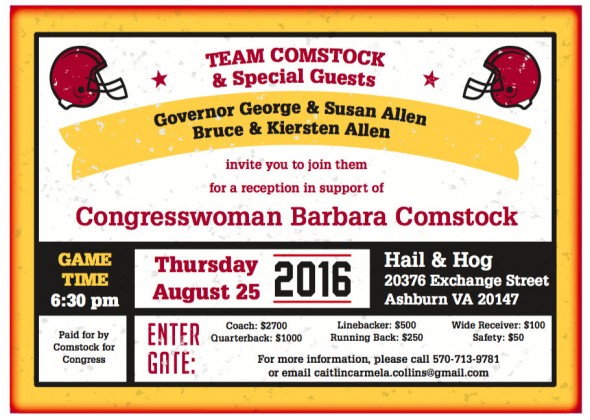 Ten years ago, we were in the midst of George Allen’s “macaca” meltdown — see here for a lot more on that – and were soon to find out even more disturbing stuff about Allen. For instance, there was Allen’s connection to the Council of Conservative Citizens (“CCC,” aka “KKK”) hate group; Allen’s attack on reporter Peggy Fox (Allen bizarrely claimed that Fox referencing Allen’s Jewish heritage amounted to “making aspersions about people”); multiple former teammates of Allen’s talking about his frequent use of the “n word;” etc., etc.

Also, let’s not forget Another Allen teammate recalls deer head incident (“A former college football teammate of Sen. George Allen’s has confirmed details of a controversial hunting trip in the early 1970s, during which Allen is alleged to have placed a severed deer head in a mailbox that he believed to be owned by a black family.”) or GOP Senator George Allen’s Sister Documents Her Brother’s Bully Tactics: “He Saw Dentistry As A Perfect Profession – Getting Paid To Make People Suffer”… (“Referring to George’s relationship with one of her boyfriends: ‘My brother George welcomed him by slamming a pool cue against his head.'”). The point is, George Allen’s got some serious, uh, “issues” let’s just say…

So, the big question is why any politician in their right mind would actually CHOOSE to be associated with this guy? Yet here we have Rep. Barbara Comstock, in a district which George Allen lost in 2006 and which is getting more diverse every year (despite 2011 redistricting), and where Donald Trump (whose “principles” – whatever those are – Comstock supports) is likely to get creamed in November, opting to spend an evening with the Trump-like (at least in terms of the type of language he uses towards Asian Americans, African Americans, etc.) “Governor” Allen. Anyway, I just thought the voters of the 10th CD should know who Comstock chooses to hang out with. For more on that topic, see Extremists for Barbara Comstock: A Reminder of the Far-Right-Wing Loons Who Have Endorsed Her. Sensing a pattern here? Hmmmm…