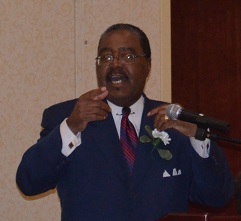 Maybe I missed these attributes in all that has been written about Jack Gravely at his passing, but from a brief encounter I was left with the impression they would be some he would want recalled: sixth generation Virginian, descendant of slaves, son of a coal miner, Vietnam veteran.

Not necessarily in that order and maybe more dear to him than those: he was his mother’s son. I will post an address he delivered at an NAACP banquet last year and from that you will also know that toward the end of his life, after all the accomplishments prominently mentioned elsewhere, he had a foreboding and brooding sense that there is something deeply wrong in our culture that is taking us nowhere good.

So if you are not inclined to read that speech, I will sum up his message: It is our participation in our communities that will deliver the answers to what ails our culture; our nation. The ability and initiative to recognize and call out right from wrong is imperative. Being satisfied with what we ourselves have and allowing others their excuses for what they haven’t achieved will not raise them up.

Jack Gravely’s message was unpopular with and resented by the preachers who build majestic churches; he’d prefer we build strong communities that raise children with dignity and the drive to succeed rather than with no shame and the excuse to need. It was respect for and fear of shaming his mother that shaped his life. There is no magic formula for instilling that in our children other than this: showing them our love for them, setting the example, and expecting as much in return.

He is owed the proper telling of his life’s story and the views that life shaped. That is missing in the remembrances thus far.