Quick background: the following three are extreme right wingers, all rabid Trump supporters. Elizabeth Schultz is, believe it or not, a member of the Fairfax County School Board, where her main focus is persecuting LGBT students and making sure that bathrooms are safe from the evil scourge of the tiny number of transgender kids who really need to pee! Recently, there were calls by Fairfax County Democratic Committee Chair Sue Langley for Schultz to step down, due NOT to her support for Trump per se (as the Post headline erroneously stated), but for her irresponsible, deranged tweets and actions on the School Board.

Second, there’s former Loudoun County Board member and long-time anti-LGBT hatemonger Eugene Delgaudio, who apparently is an ally of Schultz’s in their mutual war against “#HillaryClowns,” the infamous (albeit entirely fictional) Hillary Clinton-ordered “drone strike” on Schultz, the “List” (who knows?), and calls by Sue Langley (and others) for Schultz to step down from the School Board.

Finally, of course, we have 2013 VA GOP Lt. Gov. nominee E.W. Jackson’s latest bigoted ravings, this time about Hillary Clinton (supposedly) leaving a black church to go to a gay bar (sounds like a punchline should be coming any second…).

Anyway, enjoy your morning dollop of Trump-supporter insanity, and just imagine a world in which Trump were president and people like these would potentially be in power???  Yeah, shudddderrrrr.  Oh, and go vote for Hillary Clinton – plus tell EVERYONE YOU KNOW to do the same, and to do it early if possible. Thanks! 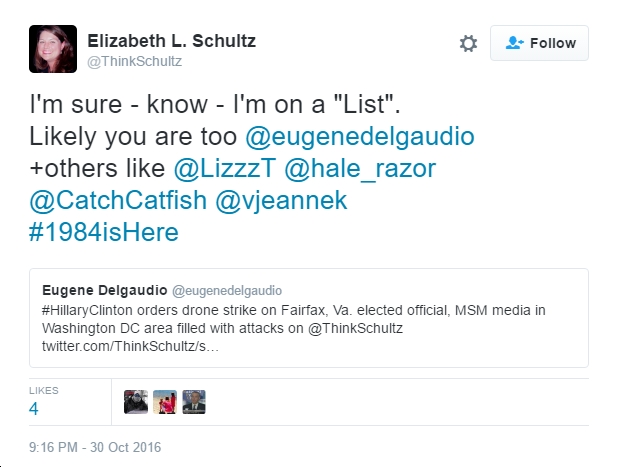 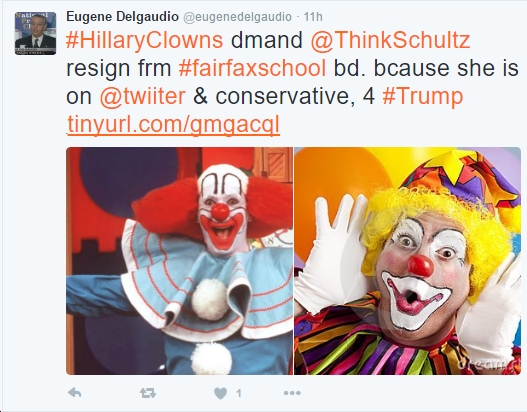 P.S. Oh, one more by Trump-supporting E.W. Jackson from yesterday, on “souls to the polls.”