According to the Culpeper Star-Exponent, Dave Brat (VA-7) has yet to respond to an invitation by the University of Richmond to debate Eileen Bedell; she has accepted.

In 2014, Brat had repeatedly criticized Cantor for refusing to debate him in the primary.  He himself then had to be pressured into debating Democr

at Jack Trammell in the general.  But at least he did it!  So far, Brat has turned down two invitations (the image at right is from one of the events) that would have given voters the opportunity to see him and Bedell on the same stage.

Perhaps Brat is afraid that Bedell will expose his front-line actions in the Republican War on Women to the tens of thousands of moderate voters in the 7th CD.  Among his many efforts, listed below, is a “personhood” bill (HR 816), that would make all abortions illegal from the moment of

conception.  No exceptions are allowed in cases of rape or incest or to save the woman’s life.  Brat’s disrespect for women as autonomous individuals and his disregard for their health and safety is appalling.  We tend to think of pregnancy as relatively safe these days, but maternal mortality has risen sharply as the CDC reports – and that’s with abortions available.  Without that alternative, many many more women would die as the result of pregnancy.

Brat’s misogyny, while hidden under a polite veneer, is arguably more dange 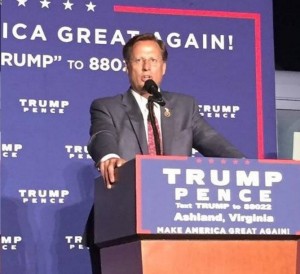 rous for women than the vulgarian Trump’s.  So far, the Constitution protects women from legislation such as HR 816.  But if Brat and other far-right extremists had their way, it would not.

Brat was an early supporter of Trump’s, accepting a donation from him in April 2015 and calling him a “brother-in-arms” which, when it comes to the Republican War on Women, they most certainly are.

Brat has stayed on the Trump Train straight through the wreck, limiting his criticism to the crudity of Trump’s language and ignoring utterly the criminality of his actions.  But then, if you’re willing to sign your name to a bill that would rob women of their lives, why would you hesitate to overlook sexual assault?

Brat was eager to debate Cantor and willing to face Trammell, but so far he’s AWOL when it comes to Bedell. Some brother-in-arms!  Perhaps he’s afraid to take on an intelligent, accomplished, and assertive woman who’ll call him out on his extreme and dangerous misogyny.

A recent poll – taken before the Trump Trainwreck – shows Eileen closing in on Brat.  She needs your help – money, volunteer time, and VOTE – to flip this seat.  To learn more about Eileen, click HERE. To donate to her campaign click HERE.  And to pitch in personally to help get her across the finish line, click HERE. 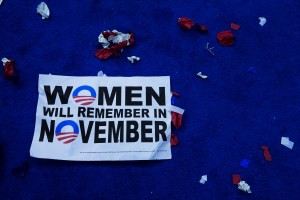 “Anti-abortion politicians on the House Courts of Justice Subcommittee don’t want Virginians to vote on a constitutional amendment to protect reproductive freedom because they...